Joy at Church reopening tinged with disappointment at 50 worshiper limitation

Joy that public celebration of Mass can resume on Monday week, 29 June, has been tempered with consternation that the government is demanding that indoor public gatherings, such as 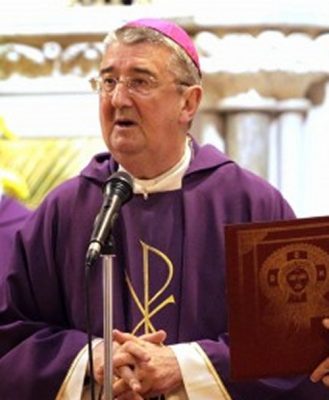 celebration of the Eucharist, be limited to a maximum of 50 people, no matter what the size of the venue.

The blanket restriction, on all public worship, no matter how large or small the venue, is set to be in place for three weeks, until Monday 20 July.

“It is obviously disappointing”, commented Archbishop Diarmuid Martin of Dublin, who noted that parishes across the country have made a huge investment, both in terms of energy and financial resources, in making their churches ready for a greater return to worship than is being allowed.

Previously, Archbishop Martin had said that it was prudent to be patient and to allow any new situation to settle down. “This is wise and I believe that many of our Massgoers will themselves be cautious in attending larger gatherings of people,” he said.

Nevertheless, he added: “It seems strange that in a Church with a capacity of 1,500 people which has been scrupulously fitted out for conformity with social distancing and with clear indications about movement and interaction of people within Church, that only 50 people might be present, while we all see a situation in which large retail outlets brimming with people.”

Not only is it a case of having too strict a limitation for those parishes with very large churches, the restriction means that only 50 people in a parish of over 10,000 will be able to attend Mass, Dr Martin pointed out.

“I hope that it will be possible to come to a more reasonable and responsible situation in which numbers permitted to attend Mass could be proportionate to the size of each Church.

“For the moment, we are obliged to follow the public health norms. It may be possible to hold additional Masses on Sundays and to continue normally with weekday Masses where numbers are not normally large.”

Earlier in the week, Archbishop Eamon Martin of Armagh had welcomed the news that the Northern Irish Executive is also allowing public worship to resume tomorrow week. He said: “It is particularly helpful that parishes in cross-border communities will be able to plan together for a safe return to Mass around the same time.”

Speaking before Taoiseach Leo Varadkar announced the 50-person limitation, the Archbishop of Armagh said: “I have been heartened by the amount of preparation which is already ongoing in our parishes to ensure that our sacred spaces will be as safe as possible when we begin to gather again together in prayer.”

Fr Tim Hazelwood, a spokesman for the Association of Catholic Priests, said the blanket restriction made no sense. The Cloyne diocesan priest said he knew of rural churches that could not accommodate 50 people and enforce social distancing of 2m at the same time, while the Church of Immaculate Conception in Mitchelstown, the largest church in the diocese, could easily accommodate well over 100 people safely.

“This means that we will now be in the dreadful position of having to turn some people away from Mass once 50 people are already present,” he said. “On the plus side, there is still no Church obligation to attend Sunday Mass and people can try to avail of Masses being celebrated on Saturdays and weekdays.”

Fr Hazelwood, who is PP of Killeagh-Inch in Co. Cork, added that there were several issues that needed to be sorted out before churches could safely open. “Parishes are supposed to provide ushers and stewards with COVID-19 related training, but who is going to train the parishes in how they are going to do this,” he said. “I am lucky, I have a very good pastoral council to support me, but in many parishes, for various reasons, the priest is having to do everything on their own, including securing personal protection equipment (PPE).

“Why can’t we organise PPE to be bought centrally for, say, the whole of Munster, so we could negotiate discount rates for bulk buying, instead of leaving every parish to sort themselves out?”

Fr Michael Twomey, PP in Clonmel, Co. Tipperary, said parishes had been advised to plan according to the numbers they thought they could safely accommodate, but with ‘no forewarnings’ the government had imposed a one-size fits all solution, with no consideration for the size of a church. He said the limitation being placed on the number of people attending funerals, no matter what the size of the church, was already a cause of major heartbreak.

“If this is not reviewed it will be a logistical challenge,” he said. “I wonder if we should reopen for Mass now on June 29th? Very disappointing!”