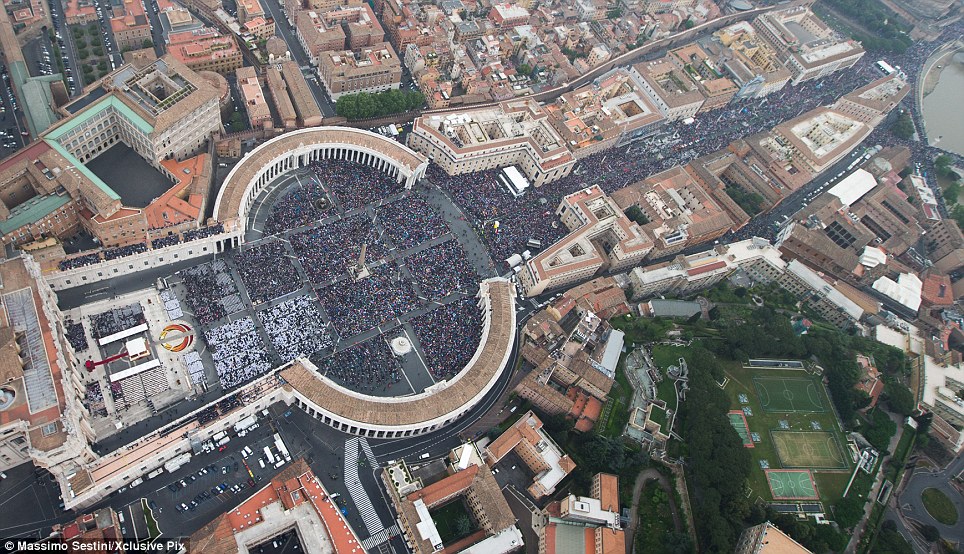 At least half a million people attended the ceremony on Sunday morning in St Peter’s Square for the canonisation of the ‘two pope saints’ –  John XXIII and John Paul II.

Many more people around the world watched the service online, on television and in 3D cinemas.

From its opening to the public at 5am, the square and its environs were filled with faithful from all over the world. Polish pilgrims, however, constituted one of the largest groups.

The event was also attended by delegations from over a hundred countries, more than 20 heads of state and many figures from the world of politics and culture.

They included the King Juan Carlos and Queen Sofia of Spain, King Albert II and Queen Paola of Belgium, Prince Hans-Adam II of Liechtenstein, Grand Duke Henri of Luxembourg, the ex-president of Poland, Lech Walesa, the president of the Argentine parliament, Julian Dominguez, and the presidents of the European Union, Herman Van Rompuy, and the European Commission, Jose Manuel Barroso.

The celebration was also attended by Floribeth Mora Diaz and Sr Adele Labianca, the carer of Caterina Capitani – the two women who experienced the miracles attributed to John Paul II.

Banners with portraits of the two saints – the same ones used for their respective beatifications – were displayed on the facade of the basilica.

In the square, adorned with more than 30,000 roses from Ecuador, and in Via della Conciliazione, hundreds of thousands of faithful prepared for the celebration by reciting the chaplet of Divine Mercy, intercalated with texts from the magisterium of both pontiffs and preceded by the Hymn to Blessed John XXIII, “Good Shepherd of Christ’s flock”.

The prayer ended with the Hymn to Blessed John Paul II, “Open the doors to Christ”.

Under intermittent rain, and during litanies invoking the protection of the saints, a procession of concelebrating cardinals and bishops who, before taking their places, greeted Pope emeritus Benedict XVI, who also concelebrated alongside the Holy Father.

A few minutes after 10 am, Pope Francis entered the square and, before proceeding with the rite for the proclamation of the new saints, greeted and embraced the Pope emeritus. 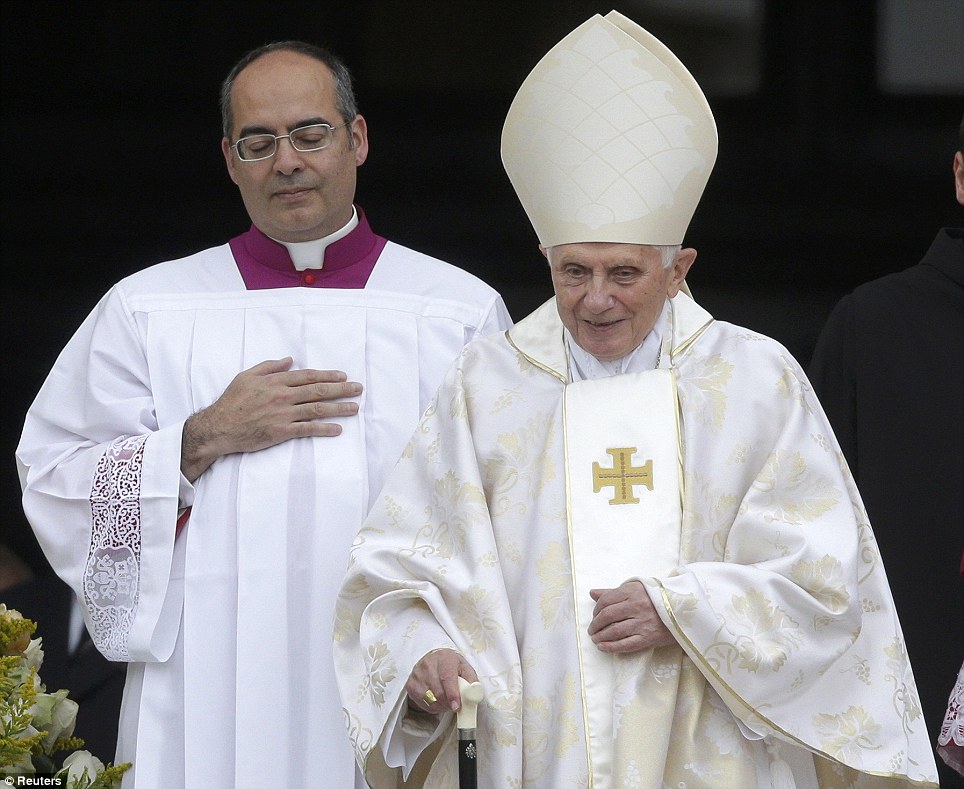 Moments later Cardinal Angelo Amato, prefect of the Congregation for the Causes of Saints, accompanied by the postulators, asked Pope Francis to inscribe the names of the two Blessed Popes in the Book of Saints, and the Holy Father pronounced the formula for canonisation:

“For the honour of the Blessed Trinity, the exaltation of the Catholic faith and the increase of the Christian life, by the authority of our Lord Jesus Christ, and of the Holy Apostles Peter and Paul, and own own, after due deliberation and frequent prayer for divine assistance, and having sought the counsel of many of our brother Bishops, we declare and define Blessed John XXIII John Paul II be Saints and we enrol them among the Saints, decreeing that they are to be venerated as such by the whole Church. In the name of the Father, and of the Son, and of the Holy Spirit. Amen”.

This was followed by the presentation to the Pope of the relics of the two saints, which were displayed on the altar throughout the ceremony; these were a phial of the blood of John Paul II, which had been displayed on 1 May 2011, and a piece of skin removed from the body of John XXIII when it was exhumed for his beatification on 3 September 2000.

Following the Gospel reading, the Holy Father gave a homily in which he defined St John XXIII as “the Pope of openness to the Holy Spirit”, and St John Paul II as “the Pope of the Family”, recalling that “at the heart of this Sunday, which concludes the Octave of Easter and which John Paul II wished to dedicate to Divine Mercy, are the glorious wounds of the risen Jesus”.

“He had already shown those wounds when he first appeared to the Apostles on the very evening of that day following the Sabbath, the day of the resurrection,” he continued.

“But Thomas was not there that evening, and when the others told him that they had seen the Lord, he replied that unless he himself saw and touched those wounds, he would not believe. A week later, Jesus appeared once more to the disciples gathered in the Upper Room, and Thomas was present; Jesus turned to him and told him to touch his wounds. Whereupon that man, so straightforward and accustomed to testing everything personally, knelt before Jesus with the words: ‘My Lord and my God!'”

“The wounds of Jesus are a scandal, a stumbling block for faith, yet they are also the test of faith. That is why on the body of the risen Christ the wounds never pass away: they remain, for those wounds are the enduring sign of God’s love for us. They are essential for believing in God. Not for believing that God exists, but for believing that God is love, mercy and faithfulness. Saint Peter, quoting Isaiah, writes to Christians: ‘by his wounds you have been healed’.”

“John XXIII and John Paul II were not afraid to look upon the wounds of Jesus, to touch his torn hands and his pierced side”, exclaimed Pope Francis. “They were not ashamed of the flesh of Christ, they were not scandalised by him, by his cross; they did not despise the flesh of their brother, because they saw Jesus in every person who suffers and struggles. These were two men of courage, filled with the parrhesia of the Holy Spirit, and they bore witness before the Church and the world to God’s goodness and mercy.”

“They were priests, bishops and popes of the twentieth century. They lived through the tragic events of that century, but they were not overwhelmed by them. For them, God was more powerful; faith was more powerful – faith in Jesus Christ the Redeemer of man and the Lord of history; the mercy of God, shown by those five wounds, was more powerful; and more powerful too was the closeness of Mary our Mother.”

The hope and joy of Easter, forged in the crucible of self-denial, self-emptying, utter identification with sinners, even to the point of disgust at the bitterness of that chalice. Such were the hope and the joy which these two holy popes had received as a gift from the risen Lord and which they in turn bestowed in abundance upon the People of God, meriting our eternal gratitude.”

“This hope and this joy were palpable in the earliest community of believers, in Jerusalem, as we read in the Acts of the Apostles. It was a community which lived the heart of the Gospel, love and mercy, in simplicity and fraternity.”

“This is also the image of the Church which the Second Vatican Council set before us. John XXIII and John Paul II cooperated with the Holy Spirit in renewing and updating the Church in keeping with her pristine features, those features which the saints have given her throughout the centuries. Let us not forget that it is the saints who give direction and growth to the Church. In convening the Council, John XXIII showed an exquisite openness to the Holy Spirit. He let himself be led and he was for the Church a pastor, a servant-leader. This was his great service to the Church; he was the pope of openness to the Spirit.

The Holy Father concluded, “May these two new saints and shepherds of God’s people intercede for the Church, so that during this two-year journey toward the Synod she may be open to the Holy Spirit in pastoral service to the family. May both of them teach us not to be scandalised by the wounds of Christ and to enter ever more deeply into the mystery of divine mercy, which always hopes and always forgives, because it always loves”.

St Peter’s Basilica remained open on Sunday until 10pm, to enable pilgrims to venerate the bodies of the two canonised popes displayed in glass cases, to which the word “Saint” has been added.