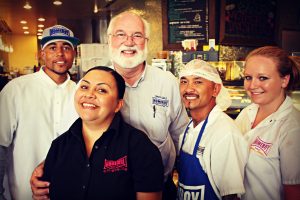 Jesuit priest Fr Greg Boyle, who founded Homeboy Industries, the largest gang intervention, rehabilitation and re-entry programme in the world, is to be presented with the University of Notre Dame’s highest honour, the Laetare Medal, on 21 May, at the college’s 172nd commencement ceremony.

Fr Greg is being given the award for being a Catholic “whose genius has ennobled the arts and sciences, illustrated the ideals of the Church, and enriched the heritage of humanity”.

The Irish-American priest began his work among gang members in Los Angeles in 1988 and now currently works with 10,000 men and women a year through Homeboy Industries.

As executive director, he oversees an operation encompassing eight enterprises, which have a total annual budget of €14million. They receive no government funding.

Gang-related deaths have decreased significantly in LA since he founded Homeboy Industries in 1992. That was the year he launched Homeboy Bakery, the first of what would become a chain of services equipping ex-gang members, many who had served time, with the means of successfully turning their lives around.

The 63-year-old Jesuit is a Los Angeles native, one of three boys and five girls born to “two amazing parents”, Irish American couple Kathleen and Bernie Boyle, who gave their offspring a “very loving happy home”.

In 2014 he told The Tablet, “We weren’t rich but we didn’t lack for anything. There was no chance that I would have joined a gang; that says nothing about my moral superiority, I just happened to live in another part of the city where there were no gangs.”

Those of his peers who were in difficulty gravitated towards self-medication or taking their own lives.

“Suicide was really quite dominant. A number of peers took their own lives. Gang violence is the urban poor’s version of suicide. Rather than take their own lives, they enter into enemy territory and hope to die, though I am not sure any of this is a conscious decision.”

The thousands of ‘Homies’ who have benefitted from the work provided by ‘Homeboy Industries’ and its ancillary services, such as tattoo removal, educational training and mental health and substance abuse counselling, are ex members of gangs such as Bloods, Crips, Mongols MC, and Aryan Brotherhood.

There are 120,000 gang members in LA County belonging to 1,100 gangs. “Females represent between 3 to 5 per cent of that overall gang population, so needless to say it is primarily a male thing,” Fr Greg told The Tablet.

He got involved in this area after he returned from missionary work in Bolivia, where he worked with Christian Base Communities in Cochabamba.

He was appointed to the parish of Dolores Mission in the Boyle Heights neighbourhood of Los Angeles, one of the poorest parishes in this sprawling metropolis.

Its housing projects were torn apart by gangs who regularly settled scores through violence.

He was initially dealing with issues like immigration due to its large undocumented Mexican community. “But then I started burying kids in 1988, kids who were killed on our streets, and there were shootings morning, noon and night.”

He decided the first thing he would do would be to set up a school for these disaffected teenage gang members. They should have been at school, but no school would have them.

“They said they would come without weapons and learn without fighting.” But even when this school was up and running, Fr Greg knew that educating ‘Homies’ wasn’t sufficient; they needed jobs to anchor them and help them change their lives.

But with few local businesses willing to give ex-felons and gang members a start, the priest knew he would have to generate employment through alternative means.

Thanks to one benefactor, a disused bakery in the parish was bought and Homeboy Bakery was launched. Another project involved members of two rival gangs coming together to build a crèche for local children. Bit by bit the vision spread.

His book, Tattoos of the Heart, recounts the story of his work over the last thirty years, and one story in particular sums up just how important Homeboy services can be for an ex-gang member trying to change the course of his life.

A young former gang member, Frank, who had just been released from prison, came to him and told him he was finding it impossible to get a job, even though he had gone to lots of interviews.

“It wasn’t hard to see what his problem was. He had a tattoo right across his forehead saying, ‘F**k the world!’”

It spurred the priest to start a service for tattoo removal. He soon had 3,000 ex-gang members who wanted to avail of the service.

They now have a dedicated clinic run by about 42 doctors who all donate their time, and 46,000 treatments are performed a year. Sometimes it takes about 12 treatments to remove a tattoo, sometimes 15 treatments. Meanwhile, Frank has become “a security guard at a movie studio and there is no trace of the tattoo left”.