Jesuit to receive Freedom of Dublin in Hong Kong 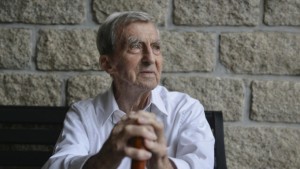 Fr Joseph Mallin SJ, the last surviving child of an executed leader of the Easter Rising in 1916, is to receive the Freedom of the City of Dublin in Hong Kong.

Dublin’s Lord Mayor, Críona Ní Dhálaigh, has stated that the 102-year-old would receive it not only for his status as a child of a Rising leader but also for his life-long work serving the people of Hong Kong and Macau through his ministry and teaching.

For many of his years in China he has worked at Wah Yan College, a Jesuit secondary school in Hong Kong.

Fr Joseph was born in 1914, just two years before his father was executed, leaving a wife and five small children.

The night before the execution, Joseph was taken by his mother (then pregnant with her fifth child) to visit Michael in his cell.

Though Joseph has no memory of that goodbye, he heeded the plea in his father’s last letter: “Joseph, my little man, be a priest if you can.”

His brother Sean had preceded him into the Jesuits, and both brothers were assigned to the Hong Kong mission.

Joseph’s sister Úna – also urged by her father to go into religious life – entered the Loreto order in 1925. She was sent to a convent in Spain, where she spent the rest of her life.

It was for his role as second-in-command of the Irish Citizen Army under James Connolly that Michael Mallin became one of the fifteen leaders executed at Kilmainham Gaol after the Rising.

He left home on Easter Monday 1916 to take command of the fighting in St Stephen’s Green, and he never came home.

In that letter written the day before his execution he tells his wife, “Pulse of my heart”, how much he will miss his children, “…and oh little Joseph my little man my little man Wife dear Wife I cannot keep the tears back when I think of him he will rest in my arms no more…”

He also urged her “to pray for all the souls who fell in this fight, Irish and English”.

Fr Mallin will not travel to Dublin for the Rising commemorations, so the freedom of the city will be awarded to him in a ceremony in Hong Kong on Monday 21 March.