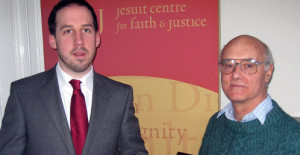 Eoin Carroll and Fr John Guiney of the Jesuit Centre for Faith and Justice.

The Jesuit Centre for Faith and Justice has said it is concerned over a number of commitments made in the Prison Service’s Three Year Strategic Plan 2012–2015 which remain unmet.

The JCFJ’s criticisms were made as the Irish Prison Services and Irish Probation Service launched their annual reports for 2015 and Strategic Plans for 2016–2018 this week.

In a statement, the Jesuit Centre warned that chronic overcrowding continues in the Dóchas Centre, Cork prison and Limerick men and women’s prison.

It also highlighted that there had been no national roll-out of a cell share risk assessment, which may have prevented the death of 21 year old Gary Douche in 2006; there was no overarching strategies for older prisoners and prisoners on protection and no review of the placement of 18–21 year olds with older prisoners as is currently the norm.

An additional concern is the growing number of committals to prison who are women, which grew by 27.14 percent.

While considerable progress has been made, Eoin Carroll, advocacy officer in the Jesuit Centre said that after conducting a follow up analysis to the JCFJ 2013 report which examined progress being made in the Irish Prison Service’s Three Year Strategic Plan, it has identified several unmet commitments.

Though the level of overcrowding has dramatically reduced, chronic overcrowding persists in a number of prisons including Limerick male and female and the Dóchas Centre.

“Assessing the 2015 prison figures, what is of particular concern is the rising number of committals to prison that are women. Just looking at the total committal figures hides a worrying rise in the number of women being sent to prison.”

Gary Douche was killed in a cell in Mountjoy in 2006 at the age of 21. According to Eoin Carroll, had there been a ‘cell share risk assessment’ it is likely that he would not have been killed.

He said the Irish Prison Service’s three year plan 2012–2015 committed in year one to introduce appropriate assessment procedures on committal.

The Jesuit Centre for Faith and Justice has previously argued that this needed to include a formal cell sharing risk assessment which has not been completed.

“Approximately 46 percent of the prison population share a cell. It is also unfortunate that the new prison in Cork will further institutionalise cell-sharing as a feature of prison accommodation, a practice that was first formalised 30 years ago and at variance of international best practice – a particularly retrograde step,” Eoin Carroll commented.

He added that now was an opportune time to pay particular attention to young adults in prison.

“Over 100 young adults are on extended lock up, which the Jesuit Centre has previously referred to as ‘severe confinement’. Many are locked in their cell for 22 and 23 hours per day.”

He suggested that the Minister for Children and Youth Affairs, Katherine Zappone, should be assigned responsibility for young adults in the criminal justice system and “immediately develop a plan to address their distinct needs.”

The JCFJ has also highlighted that the Irish Prison Service’s previous strategy committed in year one to develop specific strategies for young prisoners, women in prison, older prisoners, those convicted of a sex offence and prisoners requiring protection.

“While a well-developed strategy has been produced for women in prison, no other plan has been published. These groups have been identified as requiring special attention and action is urgently needed.”

“The Jesuit Centre has developed a policy paper on the needs of young adults in prison which it is hoped will inform policy in this area.”

There has been a good record of achievement in a number of key areas with significant improvements in conditions in parts of Mountjoy Prison, the national roll-out of the Community Return Programme, which enables the earlier release of some prisoners under supervision.”

He said such developments have significant positive effects for people in prison, for prison staff and for society as a whole.

Last month, the Jesuit Centre for Faith and Justice last month published a report on the needs of young adults in prison. See: http://www.jcfj.ie/key-issues/penal-policy/publications/576-time-to-end-severe-confinement-of-young-adults-in-prison