Japan: Bishops call for peace constitution to be retained 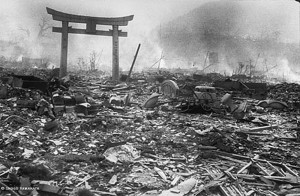 Nagasaki in aftermath of atomic bomb.

This week, the Catholic Church in Japan commemorates the anniversary of the atomic bombs on Hiroshima and Nagasaki with ten days of prayer for peace. The issue is of particular concern this year as Prime Minister of Japan has decided to abandon Japan’s 70 year constitution pledging never to go to war. In a message issued on Sunday, Bishop Peter Takeo Okada, president of Catholic Bishops’ Conference of Japan writes:

On the occasion of Ten Days for Peace 2014, I would like to extend greetings to all of you, the faithful across the nation.
When Pope John Paul II visited Hiroshima in 1981, he said; “War is the work of man. War is destruction of human life. War is death. Nowhere do these truths impose themselves upon us more forcefully than in this city of Hiroshima, at this Peace Memorial” (Appeal for Peace at Hiroshima). These words of the Pope still echo strongly in our hearts even 33 years later. There is nothing more disastrous and foolish than war. We as human beings must at any cost never repeat the mistake of going to war. Let us recall anew the words that the Pope repeatedly said; “To remember the past is to commit oneself to the future.”

This year is the 100th anniversary of the beginning of World War I. Let us think about the reasons for the tragedies of the two World Wars in the previous century, including World War II that ended on August 15, 1945. People often wage war in the name of justice for the cause of the defense of their own country. Wars are repeated while each disputing country insists that it is a just war for self-defense. As a result, numerous precious lives are lost. As Japanese citizens and members of the Catholic Church, we must be fully aware of the responsibility for the tragic consequences of the Asia-Pacific War while reflecting anew on the tide of the times that led to the war.

The Constitution of Japan was enacted after the tragedy of the Asia-Pacific War, and its Article 9 pledges that Japanese people renounce war as means of settling international disputes and never maintain war potential. Thanks to this Peace Constitution, we Japanese people have neither killed anyone in war nor been killed in war at all for as long as nearly 70 years. This fact is truly rare in human history and is an achievement to be proud of before the world. It is really joyful and bright news that Japanese citizens who have maintained this Constitution, which stipulates the renunciation of war, have been nominated as candidates for the Nobel Peace Prize 2014. 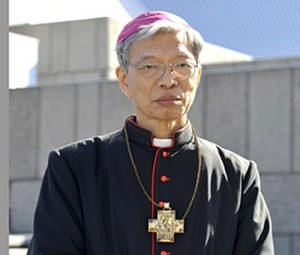 Peacemaking calls for courage, much more so than warfare. It calls for the courage to say yes to encounter and no to conflict: yes to dialogue and no to violence; yes to negotiations and no to hostilities; yes to respect for agreements and no to acts of provocation…all of this takes courage.” These are the words that Pope Francis said during the recent “Prayer Gathering for Peace” at the Vatican to which President Shimon Peres of the State of Israel and President Mahmoud Abbas of the State of Palestine were invited.

On the occasion of the Ten Days for Peace, let us make efforts and pray, with this courage that the Pope has mentioned to build peace through dialogue based on mutual trust and respect while reflecting on the past.