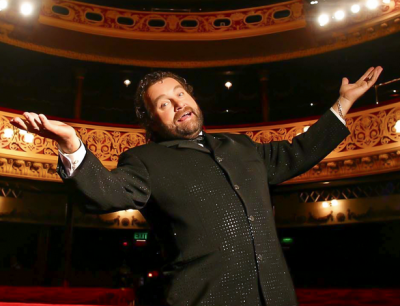 In his homily, Fr D’Arcy recalled first meeting Mr Grace and his wife Eileen 47 years ago when RTE broadcast from studios on Henry Street in Dublin.

“I can honestly say that I never had a dull, a bad, an embarrassing … anything other than joyful and happy moments every time I met Brendan or Eileen or any of the family from that day to this. This is the only sad time.”

The funeral Mass at St Nicholas of Myra church on Dublin’s Francis Street began with the comedian’s grandchildren James Gillespie, Aidan Bradley Grace and Patrick Gillespie, carrying in items that were symbolic of his life, including a microphone, a book of jokes and a guitar.

Recalling Brendan Kenneally’s poem “In Memory of my Father”, in which the poet described his own father as “Always in tune with himself”, Fr D’Arcy said Mr Grace was no different.

“As long as a person’s memory lives, and as long as we live, Brendan Grace will never die, because all of us have enthusiastic, brilliant, long-lasting and life-changing memories of the wonderful man that he was. The humanity of the man, the generosity of the man, the goodness of the man.”

He added, “Everybody loved Brendan Grace – Protestant and Catholic, young and old, cultured and uncultured – it didn’t matter what they were – educated or uneducated, Bottlers or Brendan – they all loved Brendan. He unified the country and sent them home with a smile on their face.”

The Dublin Forget-Me-Nots Choir, which brings together older people affected by dementia and memory loss, their carers and family members, also performed during the Mass. Mr Grace was a supporter of the choir.

In his tribute to the comedian, President Michael D. Higgins said that as a comedian Mr Grace’s spontaneous wit and his sense of timing, his obvious delighting in interaction with his audiences, meant that his sense of humour was drawing from – and was itself a profound contribution to – the deep wellspring of Irish wit.

“His best-loved characters will endure, precisely because they are both recognisable and representative of the experiences lived and recalled by Irish people of all ages.”

The President added that it was a privilege to know him, and a pleasure to meet him as recently as 5th June, when he accompanied the Forget-Me-Nots choir to a garden party at Áras an Uachtaráin.

“As President of Ireland, I express my deepest condolences to his wife Eileen, his children Bradley, Melanie, Brendan and Amanda, and to his wider family and his friends, and all who valued his acuity and sharp sense of humour.”