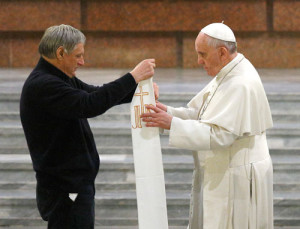 Pope Francis receives a stole that belonged to Fr Giuseppe Diana, who was killed by the mafia, from Fr Luigi Ciotti. Pic courtesy: www.thecompassnews.org

The Italian bishops conference issued a letter in response to threats on the life of an anti-mafia priest, offering support and calling for an end to corruption and injustice.

“The Italian Church… confirms its closeness to and its esteem for Fr Luigi at a time when he has been made the subject of gratuitous intimidations,” the 1 September letter stated.

Signed by Cardinal Angelo Bagnasco, President of the Italian Bishops Conference, the letter was issued in response to a threat made last week on the life of Fr Luigi Ciotti.

Italian mafia boss Totò Riina was overheard in prison saying the anti-mafia priest had to be killed.

Fr Ciotti is likely a target as the founder of two organisations, Abele and Libera, which fight mafia corruption and crime.

In the letter, the cardinal wrote of the organisations: “For faithfulness to the Gospel (the organisations promote) a process of education to the good against all forms of injustice and corruption.”

“His courageous and intelligent actions have spread to the many faces of degradation and social unrest: from the fight against organised crime to the treatment of various forms of addiction,” including gambling and usury.”

Cardinal Bagnasco commended the many people of good will who help fight mafia activity, saying that for them, “lawlessness has not just been a theoretical issue, but a practical commitment.”

Cardinal Bagnasco also praised the courageous work of “so many bishops and priests who, mostly anonymous, continue to work for a more human society, according to the Gospel of Jesus Christ.”

By providing a sense of hope in instances of violence and death, “the Church continues to carry out her mission,” he wrote.

Quoting a 21 March speech made by Pope Francis, the cardinal explained that the Catholic Church “is a Church that ‘interferes’ without hesitation to denounce the incompatibility between the mafia and the Gospel.”

It is one “that does not forget that the serious, attentive and documented report is the proclamation of salvation. Also at the cost of life.”

During a one-day trip to the Italian region of Calabria earlier this summer, Pope Francis also denounced the dishonesty and violence perpetrated by members of the local mafia in one of his masses.

“When adoration of the Lord is substituted by adoration of money, the road to sin opens to personal interest … When one does not adore the Lord, one becomes an adorer of evil, like those who live by dishonesty and violence,” the Pope said in his 21 June outdoor Mass in Sibari, Italy.

“This evil must be fought, must be expelled. It must be told no,” he said, adding that those who have chosen the mafia are “not in communion with God. They are ‘excommunicated.’”

Following the Pope’s strong condemnations, police in the region took a stand against the local mafia during a 2 July procession in the town of Oppido Mamertina, which carried a statue of the Virgin Mary.

According to Italian news agency ANSA, the procession paused in the middle of their route in front of the home of the local ‘Ndrangheta leader Peppe Mazzagatti (82) who is currently serving a life-sentence and is under house-arrest due to health reasons.

Those bearing the Marian statue made a gesture like a bow in front of Mazzagatti’s house.

After the incident, ANSA reports that the Italian Carabinieri, a branch of the police accompanying the statue abandoned the procession and later called anti-mafia prosecutors.

Although such acts are not infrequent in the region, the Carabinieri’s abandonment of the procession was a first and signified a condemnation of the homage paid to the mafia leader.