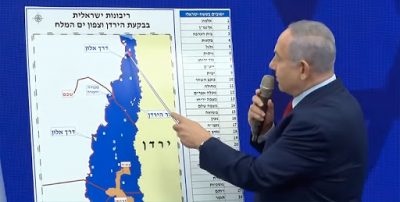 The two Church leaders have written joint letters to the Israeli ambassador to the Court of St James in London and to the British Prime Minister Boris Johnson saying that the proposed annexation would “bring about the loss of any remaining hope for the success of the peace process”.

As is usual in such interventions, the two archbishops once again stated that they “unambiguously support the fundamental right of Israel’s citizens to live in peace and safety”, but they added: “This can only be secured through negotiation rather than annexation.

“It is essential that both Israelis and Palestinians may live without violence or the threat of violence from each other or other armed groups.”

The area of the West Bank that Israeli prime minister Benjamin Netanyahu proposes to annex and absorb into the state of Israel is that part which is home to Israeli settlements that are already illegal under international law.

Archbishops Nichols and Welby were adding their voices to concerns already raised by other world leaders. Two weeks ago when the plan was first announced, the Vatican released a statement saying: “The Holy See is following the situation closely and expresses concern about any future actions that could further compromise dialogue.”

The annexation plan was first mooted by US president Donald Trump’s administration in January this year and only, officially, became part of Israeli policy following negotiations to form a coalition government between Mr Netanyahu and his long-term rival, and leader of the Israeli opposition, Benny Gantz. Under the plan, Palestinians living in the area due to become part of the State of Israel will not qualify for Israeli citizenship.

In January, Bishops Noel Treanor of Down and Connor and Alan McGuckian of Raphoe were part of an international group of bishops to make a visit to the Middle East. They found discrimination against Christians was rampant and the circumstances of Palestinian refugees had significantly worsened following a decision by President Donald Trump to cut US aid, especially the American contribution to the UN Food Programme, something on which many Palestinian refugee camp dwellers rely.

A statement released by that international group of bishops said: “Israel’s Christians wish to live as full citizens, with their rights recognised in a plural and democratic society. We have seen the vital contribution that they make especially through schools, hospitals, involvement in public life and attempting to build bridges between different faiths. Yet it is clear that at the same time they face profound difficulties across all aspects of their lives. We have heard that, along with other Palestinian Arab citizens and migrants living in Israel, many Christians find themselves systematically discriminated against and marginalised. Those we met expressed particular concern about the Nation State Law that was passed since our last visit to the Holy Land. Local Christian leaders have warned that this creates a ‘constitutional and legal basis for discrimination’ against minorities, undermining the ideals of equality, justice and democracy.

Following news of the negotiation terms brokered in Mr Netanyahu’s bid to form a coalition government in Israel, Ireland’s Minister for Foreign Affairs, Tánaiste Simon Coveney, said: “Annexation of territory by force is prohibited under international law, including the UN Charter, whenever and wherever it occurs. This is a fundamental principle in the relations of states and the rule of law in the modern world. No one state can set it aside at will.

“Ireland remains committed to a negotiated two-state solution that ends the occupation that began in 1967, with Jerusalem as the capital of both States, on the basis of international law, the internationally-agreed parameters and relevant UN Security Council resolutions. This accords with the European Union’s long-standing position. We firmly believe that this is the only outcome which will provide long term security, freedom and prosperity to both peoples.”

As is usual with political developments in the Middle East, Ireland’s Commissary of the Holy Land, Fr Bernard Jones OFM refused to comment.

For more than 800 years, the Franciscan Order of the Friars Minor (OFM) has played a role in conserving and preserving the shrines and holy places of the Holy Land. Those places entrusted into the care of the Franciscan order include the holiest site in Christianity, the Church of the Holy Sepulchre, which contains Golgotha, the site of crucifixion and death, and also the empty tomb from which Our Lord arose from the dead.

The Franciscan order gained this position of trust because of the peaceful witness given by their founder St Francis of Assisi in the thirteenth century when he made a pilgrimage to Jerusalem and entered into a dialogue with Sultan Melek al-Kamel, the Egyptian leader who defeated the Fifth Crusade.

Each year on Good Friday, there is a special church plate collection across the world to assist the Order of Friars Minor to maintain the holy places and, in recent decades, funds from this collection have also been used to help support the existence of the beleaguered Christian communities still living in Israel and Palestine. Some of the funds collected in Ireland go towards supporting schools, health clinics and orphanages.

However, this year, because of the closure of churches in the wake of the coronavirus pandemic, no Good Friday church plate collections were held. As an emergency measure, Pope Francis announced that this year that collection will take place on Sunday 13 September.

“Fittingly, the collection will take place this year on the Feast of the Exultation,” said Fr Bernard. “We are very pleased that the Pope has granted permission for this collection to take place and we are very grateful to the bishops in Ireland who ensure that these collections take place and that the funds are passed on to us quickly, because they are very badly needed.”

Fr Bernard was due to lead a nine-day pilgrimage to the Holy Land this October, but because of COVID-19 that has been cancelled. However, bookings are now being accepted for the pilgrimage that he will lead next year.