ISIS slay up to 30 Ethiopian Christians 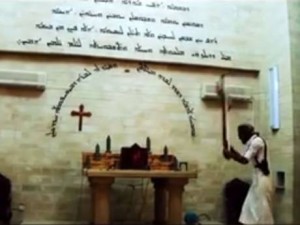 The militant terrorist group, ISIS, has released another video in which up to thirty Ethiopian Christians captured in Libya are shown being savagely killed in two separate locations.

In one section, an IS affiliate in eastern Libya known as Barka Province is shown beheading 12 men on a beach while another affiliate in the south, calling itself the Fazzan Province, is shown shooting dead a group of about 16 men.

Text on the screen identifies the men as “followers of the cross from the enemy Ethiopian Church”.

The footage also includes the destruction of a number of churches, altars and works of religious art at unspecified locations as well as rants against Christianity, including condemnation of the doctrine of the Trinity. Christians are branded infidels.

A masked fighter brandishing a gun warns Christians they must convert to Islam or pay the ‘jizya’ – a special tax prescribed by the Quran during the early Islamic conquests in Asia and Europe or face slaughter.

“To the nation of the cross, we’re back again,” this new video announces before continuing to show the executions. “Muslim blood that was shed under the hands of your religion is not cheap.”

“We swear to Allah … you will not have safety even in your dreams until you embrace Islam,” the narrator threatens.

“We strongly condemn such atrocities, whether they are Ethiopians are not,” the Ethiopian communications minister Redwan Hussein told AFP.