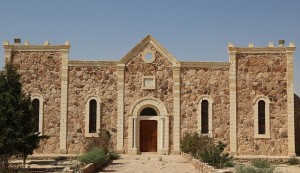 The Chaldean Bishop of Aleppo, Bishop Antoine Audo, on Friday gave his reaction to the destruction of an ancient Catholic monastery in the Syrian town of Qaryatain by Islamic State militants.

The monastery dates back to the 5th century AD and is located in the central Homs province.

Bishop Audo said IS wanted to send a message of “violence and intolerance” by destroying this symbol of Christianity and to encourage Syria’s Christians to flee their homeland.

Asked for his reaction to the destruction of the monastery, Bishop Audo said, “As usual for us Christians, it is a message of violence and intolerance, a message to spread fear everywhere.”

The destruction of the monastery comes after IS kidnapped 250 people in Qaryatain earlier this month , including dozens of Christians.

Referring to the hostages’ situation, Bishop Audo said IS had “two goals” in the kidnapping: the first was to obtain ransom money in exchange for the hostages’ release.

The second was to “spread a message of terror” and show people they didn’t believe in a political solution.

In addition, he conceded it was “possible” that the hostages could be killed, adding that IS has “no conscience or morality” and “they are able to do anything”.

The town of al-Qaryatayn is at a strategic crossroads in the central province of Homs.

Earlier this month, IS fighters seized it from forces loyal to Syrian President Bashar al-Assad.

According to the London-based Syrian Observatory for Human Rights, (SOHR), IS captured most of the Christians in the town – around 250 men, women and children.

Speaking about the incident, Mgr Mario Zenari, Apostolic Nuncio to Syria said, “News about the fate of the Christian families is sketchy… They are probably held for different reasons, perhaps as human shields or something else. The only thing that is certain is that they are in their hands. The situation is messy and the various factions are still fighting each other.”

The fate of Fr Jacques Mourad, a Syrian Christian priest who was prior at the monastery, is still unknown.

He was captured last May. At the time of his abduction, he was helping hundreds of Muslim and Christian refugees fleeing from Palmyra after IS seized the city.

St Elian was a native of Homs who was martyred by the Romans for his refusal to renounce Christianity in 284AD. A physician, many miracles of healing are attributed to him.

The church was founded in 432AD on the place where St Elian is said to have been martyred.

His remains were kept in a sarcophagus in a small chapel to the right of the church’s main crypt.

In 1969-70, Mar Elian monastery was renovated. During the restoration work, plaster which covered the inner walls of the church crypt was removed, revealing ancient frescoes depicting murals of Jesus, Mary, the Apostles, and various prophets.

Some dated to the 12th century, but others were thought to be 6th century works, making them the oldest surviving church paintings in Syria.