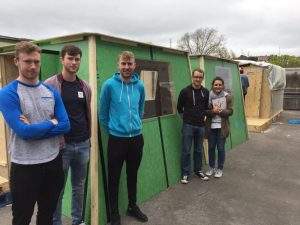 The students built homes that can be erected in 40 minutes, with walls made of cardboard, roofs which unroll like cling film and interlocking pods that can expand or contract depending on how many people they need to accommodate.

Shane Fleming and his team decided to design a shelter that was more like a house than a temporary construction. They incorporated a porch so that people could sit outside and not have to stay indoors all the time.

“We wanted a shelter that was solid but was also a nice home for people,” he said.

“It’s actually quite bright now even with the door closed,” said his colleague Isabel Quinn, who worked with four others on the design and final construction of the shelter. 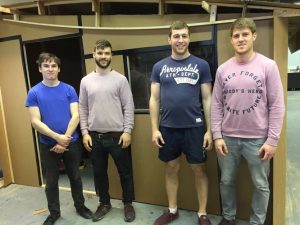 Having a place called home was a concern for several of the groups of students, who said that taking part in the project was a reminder of the trials that people have to endure when seeking safety.

“It just makes you appreciate what you have that you take for granted,” said Liam Jackson, who worked with four others on the pre-insulated shelter.

“When you start realising that people don’t have a roof above their heads, you begin to look more closely at what they actually need to just survive.”

The designs and buildings by the students were made under the mentorship of Akiboye Connolly Architects, following briefings from UNHCR and architect Gráinne Hassett, who worked in the Calais camp in France.

She is an award-winning architect and senior lecturer at the University of Limerick, and was so upset by the plight of the refugees and displaced that she went to the Calais camp and  designed some of its key buildings, including a women and children’s centre, a therapy and community space, a vaccination centre, youth centre and theatre.

She also secured donations and got reduced prices for materials from Irish construction and supply companies for the buildings.

Dr Denis Kelliher, a lecturer in the Department of Civil and Environmental Engineering in UCC, said of the latest project with Cork students: “This is a real hands-on project.” His department and Akiboye Connolly Architects asked students to use their skills to respond to real life issues, and it does not get any more real than the refugee crisis. 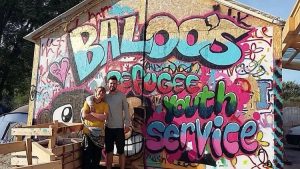 “The aim of the project is to emulate real life and practical solving of problems relevant to today’s world,” said Simon Connolly of Akiboye Connolly.

“We encourage the students to ‘think on their feet’, working through a full design and construction process in teams, as they will in professional practice, and develop a good understanding of working with real materials at full size.”

The students’ original thinking impressed Akiboye Connolly. “Their inventiveness in coming up with unconventional solutions impressed us, as well as their commitment to understanding the human problems they can tackle as engineers,” said Caroline Akiboye, who added that they also wanted to raise awareness of the global debate on the issue of habitation and displacement.