The last Jesuit director of the Pioneer Total Abstinence Association has urged Irish society to tackle its excessive drinking for the sake of its children.

Referring to Childline’s figures which revealed its volunteers received 1,200 calls, texts and online contacts from children on Christmas Day, Fr Barney McGuckian expressed concern that much of this was alcohol related.

“The worst thing about excessive drinking is not the men it makes drunk but the children that it makes afraid,” Fr McGuckian told CatholicIreland.net.

He said the fact that Childline had been inundated with calls from children suggested that “there must be some great pain going on”. He appealed to parents to make sacrifices in their consumption of alcohol for the sake of their children.

Fr McGuckian was speaking after members of the Pioneers gathered in Gardiner Street church in Dublin to mark the Pioneer Association’s 120th anniversary and the historic transfer of the Association’s governance from the Jesuits to lay people.

Explaining the reason for the transfer, the 82-year-old priest said, “The Jesuits haven’t the numbers to keep things going and to guarantee it. I’ve known for over 20 years that I was the last Jesuit. We have been planning this for a long time.” 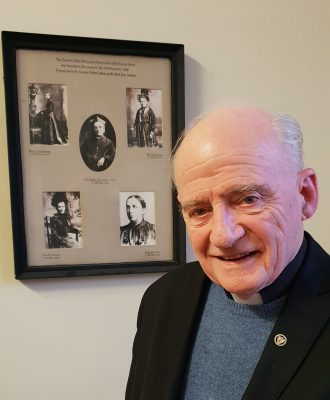 “I don’t know where we are going in the 21st century. It is a very complex reality we are trying to deal with now.”

While the number of problem drinkers has declined in Ireland, according to Fr McGuckian, the big growth area is Africa.

“The problem of alcohol in Kenya has been described as a state of emergency, so we are dealing with a massive worldwide problem. The Pioneers ask people who have no problem with alcohol to give it up in solidarity with someone who has a problem.

“It is a high ideal but in Ireland thousands of people have risen to it. The Pioneers worked a miracle in Irish life between 1898 and 1918 when 200,000 of the so-called drunken Irish sobered up.”

Among the Association’s high-profile members are the horse racing trainers Aidan O’Brien and Jim Bolger.

Olive and Seamus McRory from Co. Longford are lifelong Pioneers. They were married by Fr McGuckian in 1976.

Mr McRory told CatholicIreland.net that he made the decision to become a Pioneer because he thought life was “grand” without drink. “I could never understand people who would go out and enjoy themselves for two hours and then would have too much drink and the next day would be complaining how unwell they felt.”

Mrs McRory said she didn’t drink when she was young, but didn’t think deeply about it. “At that time people didn’t take that much and as I was driving from a very young age – when I was 17 – it just never occurred to me when I socialised with my friends to drink. I kept the pledge.” 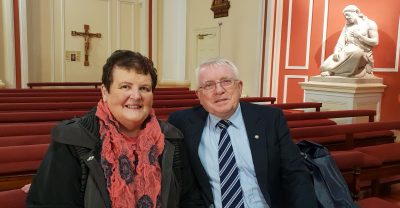 Mr McRory said he “totally disagreed with sponsorship by alcohol companies of any products that involve young people”.

Mrs McRory said she regretted that “everything nowadays centres around alcohol”.

She added, “We would encourage people not to drink, but I think it would be falling on deaf ears.”

She lamented the Government’s decision to introduce pub opening on Good Friday, describing it as “a bad decision”.