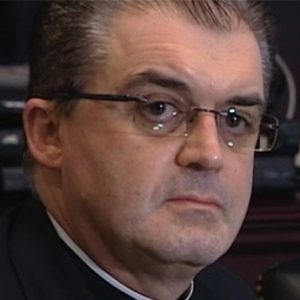 An Irish priest from Co. Tyrone has accused the US Diocese of Palm Beach of “ruining his reputation and career because he reported the sexual misconduct of another priest.”

Fr John Gallagher is taking his case to the US Supreme Court and is set to become the first Catholic priest to sue the Catholic Church.

The 51-year-old alleges he was pushed out of his parish by Bishop Gerald Barbarito and the Diocese of Palm Beach because he refused to cover up for another priest’s sexually inappropriate behaviour with a child.

Indian priest Fr Joseph Palimattom came to serve in Fr Gallagher’s parish, the Holy Name of Jesus, in December 2014. The Indian cleric showed child abuse images to a 14-year-old parishioner, who complained about his actions in January 2015.

The priest was later convicted of showing obscene material to a minor and served a six-month sentence in the US. He was then deported back to India.

Fr Gallagher claims that when he contacted the diocese to report the abuse incident the morning after it had been reported to him, a diocesan official told him, “We’ve dealt with this before, we normally put them on a plane and send them back.”

When he told the official that he was co-operating with the sheriff he was told, “Well you don’t have to give them all the information.”

Fr Gallagher claims he was then “frozen out” and punished for being a whistle-blower by the diocese and for passing information on the paedophile priest to the police in Florida.

Some weeks afterwards he was rushed to hospital with a suspected heart attack after becoming unwell while hearing Confessions.

While in hospital he asked Dominican nun Sr Ann Monahan to retrieve files on the Fr Palimattom scandal from his office at the Holy Name of Jesus Christ church.

Sr Ann managed to do this, but was later stopped by church officials and the keys to the building were taken off her.

“I was told to leave. When I protested, I was told ‘You’re fired’,” the then 84-year-old nun recounted.

“I’m a Dominican and our motto is ‘The Truth’ and that is all Father John ever did as a priest, tell the truth.

“I’ve been a nun for 67 years and I felt I was treated badly and Fr John was treated very badly indeed. I find it hard to forgive them [the Church] for what happened.”

When Fr Gallagher got out of hospital he returned to his parochial house to find the locks changed. A new priest had been appointed. He had been due to leave, under the bishop’s orders, a month later, in July.

“I was in shock,” said Fr Gallagher. “I had just suffered a suspected heart attack and wanted to return to my home to recover. Instead, I was homeless.”

A letter from the bishop suggested he needed “treatment” for his mental health and an all-expenses-paid trip was offered to a clinic in Pennsylvania.

Fr Gallagher refused to go and has been on paid leave since.

The Diocese of Palm Beach has rejected Fr Gallagher’s claims. In a statement issued two years ago, the Communications director for the Florida diocese said it was “deeply disheartened and troubled” by the allegations of Fr Gallagher and stated that it could no longer stand by in “relative silence when we know the allegations are a complete inaccurate representation of the facts”.

Elsewhere it stated that access to Fr Gallagher’s residence was never denied him, nor was he refused sacraments.

“At his request, he was placed on leave and continues to receive salary, health insurance and benefits. He was not named as pastor of Holy Name of Jesus Church for a number of reasons not related to the incident involving Fr Palimattom,” the diocese said.

According to the diocese, the Co. Tyrone-born priest was assigned to a different parish as parochial vicar and was due to begin there on 1 July 2015, but he never took up the assignment because he asked to be put on medical leave, which was granted by Bishop Barbarito.

But according to Fr Gallagher, he was “threatened by the diocese, offered a demotion, and I was asked to resign from priesthood”.

He said the diocese told him, “We are not happy with your performance or what you have done.”

According to Fr Gallagher, he had been operating as a one-man parish with nine Masses. “My collection went up 12% and I took $147,000 off the debt in the time that I was there. The people voted with their feet and their support and our Mass attendance went up.”

Last week, Fr Gallagher told the Irish Independent that while there have been other priests who have been whistle-blowers, “to my understanding I am the first to bring a case of this nature to the highest court in the land, the US Supreme Court.”

He criticised the lack of “protection for anyone who reports sexual abuse in the Catholic Church. I am not the first to report such evils. However, based on how I’ve been treated, priests have said they will not report sexual abuse.”

In failing to protect the person who reports the abuse, “children are now more vulnerable and are in danger of continued violation and of not being protected by the Catholic Church,” he warned.

Fr Gallagher said he prays the US Supreme Court will allow him to do what no other clergy member has done before: sue the Catholic Church.

“There is nothing in the Catholic Church doctrine that says they can punish a priest for reporting child abuse. So this is a civil matter. It has nothing to do with the Church’s doctrine. And only when the Church’s doctrine is involved is there protection under the first amendment right,” Theodore Babbitt, Fr Gallagher’s lawyer, said.

Fr Gallagher has had no communication from the Vatican since January 2015 when Cardinal Sean O’Malley, who heads up the Pontifical Commission for the Protection of Minors, called him and asked him to consider allowing the matter “to blow over”.

For that reason, he describes the Vatican’s recent landmark abuse summit as “Much ado about nothing!”

Investigating police in Palm Beach have written letters of support for the Irish priest to Cardinal O’Malley, but so far they have had no response.

Chief Deputy in the Palm Beach County Sheriff’s office, Michael Gauger, said that in 44 years as a police officer he had witnessed many other events where church staff had actually impeded investigations.

“Due to Fr Gallagher’s co-operation the case was swiftly resolved and the opportunity for additional crimes was diminished,” he wrote.

“Educated in the pattern of behaviour by those engaged in this inappropriate behaviour, the crime could have escalated to something physical which would have been devastating to the victim as well as the Catholic Church.”

He urged Cardinal O’Malley to make sure Fr Gallagher “receives accolades for his compliance with criminal investigators”.

Fr Gallagher is originally from Strabane and he served in the Long Tower parish in Derry until 2000 when he took up the post in the US.

The Irish priest is well known throughout the Catholic community in the States, has made several religious music records and numerous television appearances.

In 2012 the then Pope Benedict XVI wrote him a personal note, thanking him for his work with the Church.