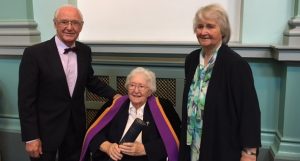 Irish missionary nun, Sr Dr Hilary Lyons, has been awarded a Hononory Fellowship of the Faculty of Public Health by the Royal College of Physicians of Ireland.

A member of the Missionary Sisters of the Holy Rosary, the award was made to Sr Hilary in recognition of her contribution to health services in Sierra Leone over a period of 42 years.

Born in 1924 in Louisburgh in Co Mayo, Sr Hilary entered the Missionary Sisters of the Holy Rosary in Killeshandra in 1943.

Having graduated as a doctor in 1952 from UCD, she spent most of her life in Sierra Leone, West Africa.

She now lives in retirement in Dublin with her community.

In 1954, the Holy Rosary Sisters took charge of the clinic at Serabu from the St Joseph of Cluny Sisters.

Under the direction of Sr Hilary, the Serabu clinic became a hospital and quickly gained a considerable reputation for the quality of its services and soon established a training unit for nurses and midwives.

As the principal doctor there, Sr Hilary won renown throughout Sierra Leone for the development of the hospital’s medical services, in particular for Serabu’s innovative approach to primary health care.

In 1965, the Holy Rosary Sisters opened their second hospital at Panguma, in the Eastern Province.

Sr Hilary gave an account of her life and mission in an article in Ireland’s Own – http://knuns.org/2015/06/re-defining-mission-written-by-sr-hilary-lyons-irelands-own/

After she returned to Ireland, Sr Hilary continued to support Sierra Leone.

The first Irish missionaries arrived in Sierra Leone in the 1860s.

On 1 April 2003, Sr Hilary, as President of the Sierra Leone – Ireland Partnership (www.slip.ie) led a delegation to meet the Oireachtas Joint Committee on Foreign Affairs seeking to have Sierra Leone included as a priority country in the Irish Aid programme.

With typical missionary values and advocacy zeal for rural communities, she told the Committee: “I am heartened by the positive attitude of the joint committee to granting priority status to Sierra Leone. Of all the things that have been mentioned, foremost in my mind is the rural situation. Those areas have been devastated.”

“When the people return to their communities, they find their houses destroyed, their coffee trees and oil palms not pruned, their farms overgrown with bush. To get them rehabilitated, I would see, as a top priority, the provision of aid to the rural communities.”

“It is not the amount of money we provide, but aid workers getting out there to deal with the situation.”

When the country was not safe, many of the aid agencies stayed in the large towns.

Ireland opened a diplomatic and development aid mission in Sierra Leone in 2005, and it became a partner country in the Irish Aid programme in 2013.

Ireland established a full embassy in Freetown in 2014.

Her two books – Where Memories Gather and Old Watering Holes – contain a miscellany of stories and memories of her life in Mayo and in Africa. Her philosophy is that “stories untold deprive the world of much of what it stands in need”.

It is a pleasure to propose Sr Dr Hilary Lyons for Honorary Fellowship of the Faculty of Public Health Medicine of the Royal College of Physicians of Ireland.

Dr Lyons qualified in Medicine in 1952 having professed as a Sister in the congregation of the Missionary Sisters of the Holy Rosary.

The missionary order was founded by Bishop-Shanahan in the year of her birth in 1924 to provide healthcare and education in Africa.

Over a period of 150 years thousands of missionary Irish men and women have dedicated their lives to working in Africa and southern hemisphere.

Sr Hilary has enjoyed a long life and a challenging and fulfilling career. She spent 42 years working in Sierra Leone and only left when war forced her and her fellow sisters to leave in 1995.

Sr Hilary is the eldest of 9 children and grew up in a place called the Colony near Louisburgh in West Mayo.

Like many women of her generation she entered the convent immediately after her leaving certificate and following her religious profession studied medicine in UCD.

Within 12 months she was posted to Sierra Leone to a small rural hospital in Serabu previously run by the Sisters of Cluny. Her fellow sister, classmate and friend was the late Sr Dr Lucy O’Brien physician and obstetrician who subsequently was assigned to Zambia.

At 29 years of age, she took on the challenge of working on the frontline in Serabu which served a population of 40,000 in a tropical rain forest burdened with endemic diseases including malaria, typhoid, diarrhorea diseases, small pox, Lassa fever and cholera.

She was physician, paediatrican, surgeon and obstetrician.

As soon as Dr Hilary arrived she found herself having to perform an emergency caesarean section on the young daughter of the local chief as she eloquently describes in her first book Old Watering Holes.

Having survived that challenge over the next 20 years based in Serabu she initially concentrated on the building of a modern 120 bed hospital which was opened in 1970 providing acute services for the catchment population.

Maternal child health was her priority and this led her on a journey towards prevention and looking at wider determinants of health in her community.

Although her reputation as a surgeon grew she embarked on a path to public health. This led to her taking a year out to study for her Master’s in Public Health in Antwerp.

Her particular interest was anthropology and influence of culture, beliefs and customs on health.

In her book she describes her special interest in the beliefs and customs of the local population.

“There I was surprised to learn that planning, management and statistics; sociology anthropology, and group dynamics were all on the programme. My small hospital concept of medical care was blown apart. I learned that health belongs to the people, that it is locked deeply into their culture and beliefs.”

With her nursing and other health colleagues she left her clinical and hospital work behind in the evenings and travelled to the community visiting villages and people in their own homes.

She got to know the leaders of the female secret society, the Bundu, and was invited to join this group. Through this engagement with women, villagers and chiefs, Sr Hilary and her colleagues promoted the positive and tried to stop harmful practices especially in childbirth.

These links were also used to train the traditional birth attendants in basic safe delivery. Preventive health programmes were established including in education and vaccination.

Sr Hilary was a vocal proponent for public health and primary care and worked with the Ministry of Health in Bo.

Her influence was not just in the development of health service in Sierra Leone but also had a ripple effect in many other countries.

She was a contributor to the seminal book edited by David Morley, ‘Practising Health for All’ that describes how communities can develop their own health services.

In the 1980s she went to work with the Ministry of Health in the Bo region. The Government of Sierra Leone recognized her in 1984 by making her a Commander of the order of Rokel.

Sr Hilary focused on nurse training including registered and certified nurse and later on the community — in particular community health education.

Civil war came to West Africa initially to Liberia in 1990 and spread to Sierra Leone.

In 1994, the Sisters were joined by a young volunteer from Ireland Dr Sam McConkey. Although she and her fellow sisters worked through the years of unrest and destruction her work and life in Sierra Leone came to an abrupt end in 1995 when their hospital was attacked and fellow sisters kidnapped.

The sisters had to leave with no notice. She fled to neighbouring Cameroon and remained there a further three years.

Sr Hilary has written two books about her life and work – Old Watering Holes, Mayo to Serape and Where Memories Gather, Chuckles and Wisdom.

She has written articles reflecting on her experiences especially about health culture and communities in Sierra Leone.

However, it is not just by her written words that we propose to honor her today but by her actions and her achievements.

Sr Hilary’s work for Sierra Leone did not stop however and since 2000 she has been retired in Ireland but remains a vigorous supporter of her adopted country lobbing for full Irish diplomatic presence — which was successful.

She has been an active member of the Sierra Leone — Ireland partnership SLIP.

The recent Ebola crisis which afflicted West Africa is still fresh in our minds. While the war caused great suffering and destruction including the burning and looting of the hospital the training and education and investment in people has sustained the population.

In retirement Sr Hilary continues to work on supporting others and also her family and fellow sisters based in Dublin.

Sr Hilary exemplifies the best of her generation and ours in medicine and is an inspiration to many of us who worked in global and public health.

The Faculty of Public Health Medicine and more recently the whole of RCPI has embraced and supports global health initiatives — many of us here today worked in resource poor countries and were inspired by people such as Sr Hilary.

Over the years volunteers, missionaries and others have brought back their experience to healthcare in Ireland.

The Dean and RCPI community also foster stronger links through the Global Health and Equals initiative. It is therefore very fitting President that we recommend Sr Dr Lyons to you for the award of Honorary Fellowship of the Faculty of Public Health Medicine of the RCPI.