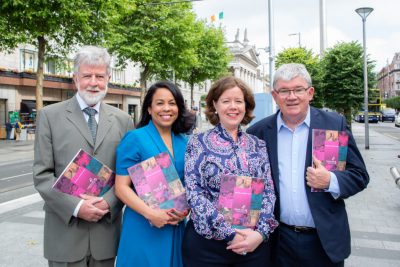 In more than 60 countries at least 52 missionary societies have implemented 265 projects worth over €13.4 million, helping over 1,450,000 people. This is according to the Annual Report 2018 of Misean Cara (the resource service for Irish missionaries).

“Meeting Ebola survivors in Sierra Leone, I saw how the struggle to survive continues long after the TV cameras have gone on to the next breaking disaster,” said Heydi Foster, CEO of Misean Cara, as she launched the annual report at Misean Cara’s AGM at Wynn’s Hotel, Dublin, last week.

In her overview in the Annual Report 2018 she wrote about how she met survivors of the 2014–2015 Ebola outbreak. One man lost 29 members of his extended family. Many survivors of Ebola are in poor health and are shunned by neighbours. However, Sisters of St Joseph of Cluny and Missionary Sisters of the Holy Rosary are supporting these people.

“I saw Sisters embracing people who have been made outcasts because they survived Ebola, showing them, and their neighbours, that there is nothing to fear,” she stated. She also described the work of the Irish Jesuit Missions in refugee camps in South Sudan among those who have been displaced by violence in the Republic of Sudan and who are still under danger of attack.

Misean Cara Chairperson Lucy Franks was also at the 2019 Misean Cara AGM, and she thanked Irish Aid for all the support it provides. “There’s a great recognition of the sort of work done by Irish missionaries, especially in the A Better World policy. All of the work being done by missionaries is so important to the foreign policy of Ireland it is part of the mainstream.” 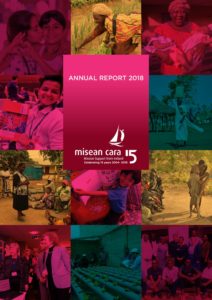 Misean Cara welcomed the increase in the Irish government’s budget for overseas aid under Irish Aid. While some 265 projects were funded, there was demand for more, and Misean Cara is looking for other sources of finance as part of its Funding Diversification Plan 2018–2019.

Lucy Franks also highlighted work on understanding and defining the “Missionary Approach to Development Interventions”, which was presented at conferences in Ireland, Europe, Canada and Africa, helping participants to understand broader faith-based approaches to development.

The Annual Report 2018 includes countless examples of vital missionary work. For example, people living with HIV in Singida in northern Tanzania are supported by the Medical Missionaries of Mary in what is considered by the Tanzanian government to be a centre of excellence in HIV treatment and prevention.

Likewise, migrants in Lima (Peru) who live in the hilly concrete jungle of the barrio of San Juan de Lurigancho are using hydroponics to grow vegetables without the need for soil. They are supported by the Presentation Sisters, and more than 1,000 people are growing their own vegetables and selling the surplus through a cooperative.

Misean Cara expressed concern about climate change, which continues to have a major impact on the livelihoods of the poor, especially in Africa. For example, flooding in southern Kenya is becoming a regular occurrence. The Spiritan Fathers, with the Kenyan Red Cross, coordinated emergency rations of food to families displaced by floods in Wenje Parish on the Tana River in southern Kenya.

Heydi Foster concluded the launch of the Annual Report 2018, stating: “The next 15 years are crucial to our organisation and the world. Imagine in that time we could achieve the goals of the SDGs [Sustainable Development Goals] and our world could totally be transformed. Missionaries will be at the forefront of this transformation, and together we will ensure no one gets left behind.”

Since its foundation in 2004 as the Irish Missionary Resource Service, Misean Cara has supported the work of its members in 94 countries around the world. Using different languages and working with different cultures, thousands of life-changing projects have been implemented with one common thread: Misean Cara members working in solidarity with a community to address a real and immediate need.