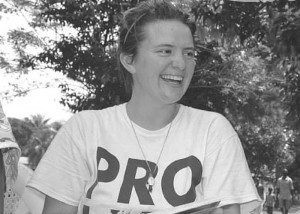 Tributes have been pouring in for a young Irish lay missionary who was killed in a road traffic accident in Liberia this week.

Mary Ann O’Driscoll from Glasnevin parish in Dublin died earlier this week in the Liberian capital, Monrovia after she was struck by car which is alleged to have been speeding.

The 24-year-old was working as Director of the Liberia Mission for the Franciscan Works charity, a role she had held since arriving in West Africa in February 2013.

On its website, Franciscan Works described Mary Ann as “a vibrant woman with an infectious, saintly faith.  At the young age of 24, she courageously served God and His people with a whole and diligent heart, never ceasing to seek and do God’s will.”

During one of her first volunteer trips to Liberia Mission, she helped begin ‘Soul-diers for Christ Ministry’ programme in which students of the mission serve God and neighbour through outreach projects in the community.

“At the core of Mary Ann’s motives was a pure desire to serve God, and she did so with radiant Joy.”

In a letter for her local Glasnevin parish newsletter, Mary Ann O’Driscoll had explained that though she was meant originally to spend three months in Liberia, the felt “drawn to missionary life and to the country”.

“I thought I would be here for three months and that would be enough to satisfy my call to be a missionary. I had every hope of travelling the world and even got accepted to a Master’s degree. My plan was set and I was looking forward to my time in Liberia so I could close that chapter.”

After the three months she left Liberia with “a heavy heart, I felt so drawn to missionary life and to the country,” she wrote.

As the director of a Liberia mission she was involved in the construction of a science lab as well as building a 100ft well in the country.

Explaining her work, she said, “I am here as Director of Liberia Mission. It is a big task, and I am extremely nervous. This is my first big job.”

“I did not even realise what Liberia meant to me until I returned to Ireland and realised what a home Liberia had become.”

“It was a home to me because it is the place I feel closest to God. I feel like I am best able to live how He intended when I am here.”

“We do not have running water, washing machines…we only have electricity certain hours of the day.”

“But, I would not have it any other way. It is not even a sacrifice. It is a comfort. It makes me focus on more important things and appreciate those luxuries when I have them.”

According to the Franciscan Works and Liberia mission, Mary Ann was hit by the vehicle on Tuesday evening and passed away early on Wednesday morning.

“Our sincerest sympathies go out to Mary Ann’s family and friends. Please pray for their consolation as well as the repose of Mary Ann’s sweet soul. May the angels lead her in,” the group’s Facebook post states.

Mary Ann O’Driscoll is survived by her parents and siblings.