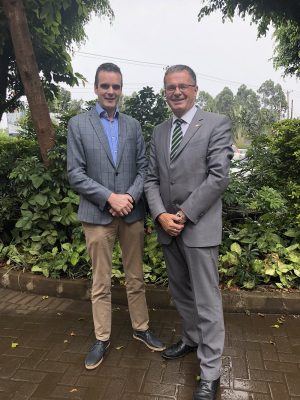 The Irish Farmers Association (IFA) President, Joe Healy, has met the Irish Ambassador to Kenya, Dr Brendan O’Neill, on a visit to see African farming activities supported by the IFA.

The IFA President is visiting Kenya, Uganda and Ethiopia with the Association’s chosen charity partner Self Help Africa this week.

In Ethiopia the Irish Embassy welcomed both, stating “Really productive meeting with Self Help Africa and IFA discussing our joint work on supporting smallholder farmers in Ethiopia to increase productivity and access local, regional and global markets. Investing in rural women [is] particularly important.”

The links between Irish farmers and the IFA, Self Help Africa and Ethiopia are particularly strong and Joe Healy is visiting communities that benefited in some of the earliest activities that the charity carried out in Africa with support from Irish farmers.

Self Help Africa was created in the wake of the Ethiopian Famine of 1984/5 to create long-term solutions to hunger and extreme poverty in the region. The IFA supported one of its first actions – the shipment and distribution of 2000 tonnes of Cara Donegal seed potatoes to famine affected communities in Ethiopia.

Back then, former IFA President the late Joe Rea was to the fore, and in the late 1980s there was further support for programmes of irrigated horticultural production promoted by Self Help Africa in the Meki and Marako regions of southern Ethiopia.

During his trip, Joe Healy is meeting representatives of the Meki Batu Co-Operative Union, a now 14,000-strong horticultural co-operative that goes back to that time in the late 1980s. Today, Meki Batu has its own processing, packing and transportation systems, sells fruit and vegetables in regional and international markets, and is one of the main suppliers of vegetables on the long-haul flights of the country’s national airline.

The economic impact of Meki Baku Union on the wider communities around Meki, Adami Tulu, Marako and Awasa has been considerable, with the union also carrying out a range of social service activities, including the construction of a primary school that was built a number of years ago from a share of trading profits made by the organisation. Each year, the union allocates 5 per cent of its turnover to meeting social service needs in the wider community. 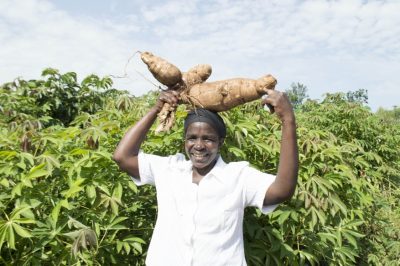 During his travels to Kenya and Uganda, Joe Healy is with Self Help Africa CEO, Ray Jordan, meeting farmers’ groups and associations and agri-businesses that are working with the Irish development organisation to strengthen agriculture and market access for farmers in the two countries.