The Catholic bishop of Limerick, Dr Brendan Leahy, the Church of Ireland Archbishop of Dublin, Dr Michael Jackson and a Minister from the Lutheran Church in Ireland, Pastor Martin Sauter, were among the 450 guests at Lund Cathedral on Monday for the historical ecumenical prayer service commemorating the anniversary of the Protestant Reformation.

The event was led by Pope Francis and the heads of the Lutheran World Federation. (See https://www.catholicireland.net/pope-francis-marks-500th-anniversary-reformation/.)

At the event, the Pope appealed to Catholics and Lutherans to “mend” history and look with honesty at the past, “recognising error and seeking forgiveness”. 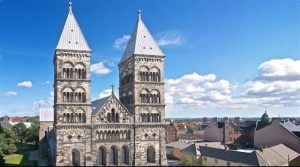 “It would have been unimaginable to our parents’ generation to think that the Pope would be joining in the 500th commemoration of Martin Luther,” he told CatholicIreland.

“The fact that Pope Francis travelled to Lund, and that the ceremony was co-hosted by both the Catholic Church and the World Federation was very significant. Pope Francis underlined how Martin Luther can be understood within the perspective of the Church always reforming itself. The Pope has also spoken of the need for us all to engage in drawing ‘closer’ to one another. He certainly was giving an example in that.”

The solemn yet contemporary ceremony had a “huge sense of history”, with profound quotes and words expressed, and a “universal” choice of music, including modern songs from many continents. “I was struck by the expression of our need to be grateful for the ‘gifts the Reformation brought’. We don’t always think of the Reformation in terms of gifts!” said Bishop Leahy.

Admittedly, the ceremony also recalled how hundreds of thousands of people lost their lives because of the divisions and tensions that arose on both sides at the Reformation, he continued. “But as well as the negative, it is important to believe that there were also gifts. Pope Francis has underlined that we Catholics can learn more about ‘reform’ and love for the Word of God from the Lutherans,” he added.

According to Bishop Leahy, there is a “certain acceleration of ecumenism” going on. He points, for example, to the recent commissioning of joint pairs of bishops (see https://www.catholicireland.net/pope-and-anglican-leader-send-limerick-bishops-on-joint-mission/), the ‘Together for Europe’ meeting of the European network of Christian movements, and now this meeting in Lund.

“Pope Francis has underlined that it’s not enough to have theological dialogue. We need also to ‘do’ things together, particularly in the area of works of mercy. That doing together will probably grow stronger now.”

The bishop of Limerick was invited to the event as one of a group of bishops of various churches who hold an ecumenical meeting promoted by the Focolare Movement each year. “For over thirty years this experience of fraternity and sharing between bishops of many churches, including the Lutheran church, has been taking place, building up a deep spiritual communion”, he said.

Asked about what comes after Lund, Bishop Leahy referred to the joint declaration made at Lund which committed the churches to move forward, thinking in particular of inter-church marriages.

“The discussion document From Conflict to Communion, published two years ago by Lutherans and Catholics, indicated steps we need to take, and some of the points have a universal application. I was struck, for instance, by the invitation to try and see things from the perspective of unity even if the divisions can be more evident and visible at times,” he said.

The Reformation traditionally dates from 31 October 1517, when the German theologian, Martin Luther, nailed his 95 theses to the door of All Saints’ Church in Wittenberg. Monday’s event and the papal visit to Sweden marked the beginning of a year-long commemoration of the 500th anniversary of the Reformation.