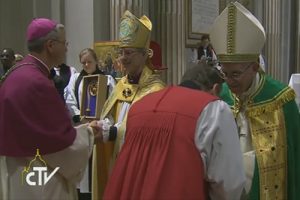 The commissioning service was one of the highlights of an ecumenical summit marking the 50th anniversary of the meeting between Blessed Pope Paul VI and Archbishop Michael Ramsey in 1966, which had been the first public meeting between a Pope and an Archbishop of Canterbury since the Reformation.

Pope Francis addressed the 19 sets of bishops, including the two bishops of Limerick, at a vespers ceremony at the Church of Saint Gregory on the Caelian Hill in Rome. He said that 14 centuries earlier, Pope Gregory had sent the servant of God, Augustine, the first Archbishop of Canterbury, and his companions, from the same church to “preach the joyful message of the Word of God. Today we send you, dear brothers, servants of God, with this same joyful message of his everlasting kingdom.”

Archbishop Justin Welby told them: “Our Saviour commissioned his disciples saying, ‘Peace be with you’. We too, send you out with his peace, a peace only he can give. May his peace bring freedom to those who are captive and oppressed, and may his peace bind into greater unity the people he has chosen as his own.”

Earlier the two leaders had signed a Common Declaration. In it Pope Francis and Archbishop Welby said their predecessors had “recognised the ‘serious obstacles’ that stood in the way of a restoration of complete faith and sacramental life between us. Nevertheless, they set out undeterred, not knowing what steps could be taken along the way, but in fidelity to the Lord’s prayer that his disciples be one.”

Much progress had been made concerning “many areas that have kept us apart”, they said, but new circumstances like “the ordination of women” and questions “regarding human sexuality” had presented new disagreements. “Behind these differences lies a perennial question about how authority is exercised in the Christian community. These are today some of the concerns that constitute serious obstacles to our full unity.”

Notwithstanding this, and even though they did not see solutions to the “obstacles” before them, the Church leaders said they were “undeterred”.

“In our trust and joy in the Holy Spirit we are confident that dialogue and engagement with one another will deepen our understanding and help us to discern the mind of Christ for his Church. We trust in God’s grace and providence, knowing that the Holy Spirit will open new doors and lead us into all truth.” 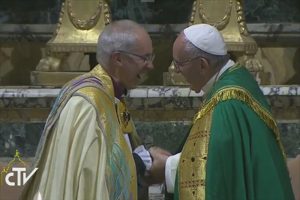 “The world must see us witnessing to this common faith in Jesus by acting together”, they wrote, citing ways of doing this such as working to  “protect and preserve our common home”, to “uphold and defend the dignity of all people”, and to “recognise the inestimable worth of every human life”.

Referring to the commissioning of the 19 pairs of bishops for ‘joint mission’, Pope Francis and Archbishop Welby said they were sending them out in pairs like the 72 disciples: “Let their ecumenical mission to those on the margins of society be a witness to all of us, and let the message go out from this holy place that Catholics and Anglicans will work together to give voice to our common faith in the Lord Jesus Christ, to bring relief to the suffering, to bring peace where there is conflict, to bring dignity where it is denied and trampled upon.”