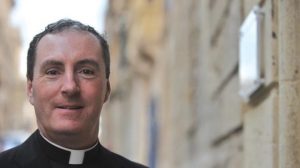 The Irish head of the disciplinary action section of the Congregation for the Doctrine of the Faith has praised journalists’ efforts to uncover the truth in cases of clerical abuse.

In an address to a Catholic Media Conference in St Petersburg, Florida, Msgr John Kennedy also spoke about his experiences handling clerical sexual abuse cases and their effect on the Church.

Appointed by Pope Francis in 2017 to head up the discipline section of the CDF, the Dublin priest got a standing ovation from journalists and members of the Catholic media at the US conference.

He related the personal cost the work of his office has taken on the 17 staff who have to review cases of clerical sexual abuse and related crimes.

“I can honestly tell you that, when reading cases involving sexual abuse by clerics, you never get used to it, and you can feel your heart and soul hurting,” Msgr Kennedy said.

“There are times when I am pouring over cases that I want to get up and scream, that I want to pack up my things and leave the office and not come back.”

Of the media, he said his office shares with journalists a desire to speak about the truth for the common good.

“If we consider that the purpose of journalism is to provide citizens with the information they need to make the best possible decisions about their lives, their communities, their societies and their governments, then we can understand that the Church’s legal process and mission have the goal of offering its judges the best possible opportunity to be able to deliver justice in this particular aspect of its life,” he said.

The Irish priest also highlighted the challenge of a constant flow of new cases into his office and he compared the work of his team to that of doctors working in an emergency room or trauma centre.

The 50-year-old priest succeeded Mexican Fr Miguel Funes Diaz as head of the CDF section. Msgr Kennedy worked as Fr Diaz’s assistant in the CDF for the previous two and a half years.

Prior to that he worked in the marriage section for four years and the protocol department for eight years.

Ordained for the Archdiocese of Dublin in July 1993, he was made a Chaplain of Honour to the Pope, with the title of Monsignor in 2008. As a priest in Dublin, he served in Crumlin for three years before he took up an appointment in the inner city parish of St Nicholas of Myra on Francis Street for two years.

In 1998, he was asked by Cardinal Desmond Connell to go to Rome to study canon law.

He went to the Gregorian in Rome and did a jurisprudence qualification and as he was starting a doctorate in canon law, he also began working at the CDF in January 2003.