Bishop Paul Tighe has addressed an influential global tech conference on behalf of the Vatican.

Bishop Tighe, who has been just over a year in the job of Adjunct Secretary of the Pontifical Council for Culture in the Vatican, told Catholic News Service: “People might be surprised there’s a Church presence, but there are so many places where the Church is not invited any longer that it’s important to respond positively to invitation.”

The Bishop added it was important to go to such events even if they are different to the usual gatherings that Church representatives attend. He also joked about how he must have been one of the few clerics or indeed grey-headed people at the renowned South by Southwest Festival (SXSW) held in Austin, Texas this week.

While being cool and ironic is the norm at such events, there is the possibility “of touching people’s hearts” when one speaks with authenticity, he suggested.

This year, a new ‘faith’ session was added to the programme in which Bishop Tighe participated. Named the ‘Compassionate Disruption’ panel, it also included Helen Osman, former Chief Communications Officer for the US Conference of Catholic Bishops, and Michael Hertl and Christoph Krachten, who are digital media innovators for the Catholic Church in Germany.

The festival’s director Hugh Forrest suggested that the faith session was aimed at taking people “out of their comfort zones”.  He hoped that such sessions would attract people with strong faith, but also those with little or no faith who are interested. 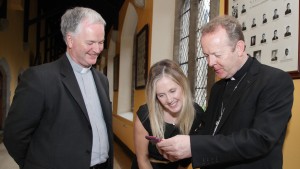 Pictured in Maynooth are: Monsignor Paul Tighe, Secretary of the Pontifical Council for Social Communications; broadcaster Audrey Carville; and Archbishop Eamon Martin, Archbishop of Armagh and Primate of All Ireland

He also expressed the wish that this might be the beginning of a further collaboration with the Catholic Church. He expressed his admiration for Pope Francis for having “a leadership role few other people have”, and in this context he hoped that Pope Francis might Skype with an audience at SXSW in the future.

Bishop Tighe added that Compassionate Disruption indicated to participants that they are people of value, dignity and worth.

“God loves you and cares for you whether you pitch well or not,” he said.

Participants asked questions ranging from whether the Catholic Church should position itself as a brand to how the Church can use digital media for good.

As the Vatican’s Adjunct Secretary of the Pontifical Council for Culture, Bishop Tighe runs the social media accounts for the Pope, as well as ensuring that the Catholic Church can enter and be active in the digital or virtual world.

Five years ago, Pope Benedict set up a Twitter account – @Pontifex – which is continued today by Pope Francis. Bishop Tighe said that Pope Francis has been very clear that Twitter should be for communicating – not preaching – and that it should aim to encourage people.

Bishop Tighe, originally from Navan, Co. Meath, was ordained a priest of the Dublin Diocese in St Laurence O’Toole Church in Kilmacud in 1983. After several postings and a period at the Mater Dei Institute of Education in Dublin, he became head of the theology department there in 2000.

Bishop Tighe worked as the Director of the Communications Office of the diocese of Dublin. He established its Office for Public Affairs, which facilitates communication between the diocese, government, public bodies and nongovernmental organisations in Ireland and Europe. He was based in Rome for a number of years before taking up his current position.

Many recall his work in Ireland and his keynote address, ‘The Church in a Digital World – Sharing The Good News’, in Maynooth for the 40th anniversary of the Catholic Communications Office in 2015.