Home > Featured > Ireland’s lead on divestment will inspire other countries

Ireland’s lead on divestment will inspire other countries 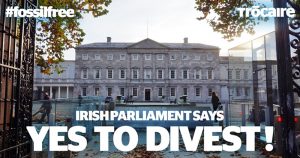 The Fossil Fuel Divestment Bill, a Private Member’s Bill introduced by Independent TD Thomas Pringle, passed through its second stage in the Dáil yesterday and now moves on to Committee Stage.

Government amendments to the short bill, which will forbid the Ireland Strategic Investment Fund (ISIF) from investing in assets in fossil fuel companies and compel it to divest itself of any such assets within five years of the passing of the act, were defeated by 90 votes to 53.

Welcoming the “ground-breaking environmental Bill that will benefit the poorest communities in the world”, Executive Director of Trócaire Éamonn Meehan said the “support of a majority in the Dáil for this Bill is an incredibly important moment for the climate justice movement in Ireland and will inspire other countries to follow our lead.

The investment strategy of the ISIF (formerly the National Pension Reserve Fund) already places a strong emphasis on sustainability and a low carbon transition. However, according to a Trócaire briefing document, an independent study of the National Treasury Management Agency’s (NTMA) Annual report in 2015 said the ISIF had more than €100 million invested in the fossil fuel industry.

“These are legacy investments inherited from the Fund’s predecessor, the National Pension Reserve Fund,” the briefing document continues. “While this represents a small percentage of the ISIF’s overall assets, the carbon potential of the companies invested in is of critical importance. Out of the eight oil, gas and coal companies with greatest responsibility for cumulative global carbon emissions, at least four were in the ISIF’s 2015 portfolio.” 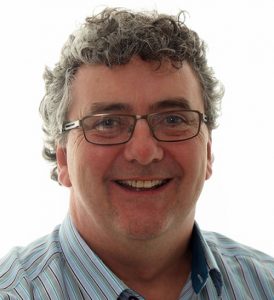 The passage of the Fossil Fuel Divestment Bill will mean that semi-state companies such as ESB and Bord na Móna will not be eligible to receive investment from the ISIF in the future.

Since 2011 there has been a huge growth in the Global Fossil Fuel Divestment movement which began on university campuses in the US. Since then it has become the fastest growing divestment movement in history. According to a report produced by Arabella investment advisors in December 2016, the value of investment funds committed to selling off fossil fuel assets had jumped to $5.2 trillion, doubling in just over a year.

An article in the Guardian cited Lou Allstadt, a former senior executive at Mobil Oil, as saying that “Divestment is speeding up the clock on the final accounting that will show fossil fuels are out and clean energy is in.”

Scientists have shown that most existing fossil fuel reserves cannot be burned without causing dangerous climate change. Campaigners argue this makes fossil fuel companies – which are spending billions exploring for even more coal, oil and gas – bad investments on both moral and financial grounds.

The article continued: “If the world’s governments fulfil their pledges to tackle climate change by cutting carbon emissions, many fossil fuel reserves would have to be kept in the ground, potentially wasting trillions of investors’ money. This risk is now being taken seriously at the highest level, including the Bank of England, World Bank and the G20’s financial stability board.”

Currently at least 689 institutions, with an asset base of $5.44 trillion, have committed to divest fossil fuel investments, including the British Medical Association (BMA), the Rockefeller Brothers Fund, more than seventy pension funds, a hundred educational institutions and seventy cities across the US, Europe and Oceania, including Berlin, Bristol, Copenhagen, Oslo, Oxford, Paris, Sydney and San Francisco.

In Ireland a number of educational institutions have promised to divest themselves of fossil fuel investments: Trinity College Dublin, NUI Maynooth and NUI Galway. In November 2016 twenty-five different groups and networks from across the country sent submissions to government ministers and more than fifty TDs and senators signed a letter to the Minister for Finance, supporting their constituents’ call to divest the ISIF from fossil fuels.

“The Irish political system is now finally acknowledging what the overwhelming majority of people already know: that to have a fighting chance to combat catastrophic climate change we must phase out fossil fuels and stop the growth of the industry that is driving this crisis,” said Éamonn Meehan. “I have seen it on the ground, from Malawi to Honduras, climate change is decimating the world’s poorest communities.”