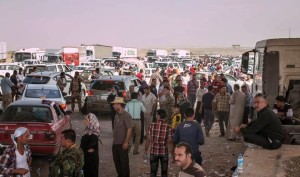 At their summer general meeting in Maynooth, the Irish bishops offered prayers for the people of Iraq who are facing a humanitarian crisis due to extensive violence in the north of the country, particularly in recent days.

Up to half a million refugees have been displaced as a consequence of this fresh bout of intense conflict led by Islamist militants.

Iraqis living in Ireland, north and south, were remembered by the bishops, as well as Ukrainians.

Archbishop Sviatoslav thanked the Irish faithful for their “abiding prayer and various works of charity … [which] has supported with prayer and exhortation the yearning for peace and justice in Ukraine.”

During their three-day meeting in Maynooth, the bishops prayed for peace in Ukraine and for its people who “have suffered greatly over the last six months due to civil unrest in their country.”

A graphic account of the Islamist takeover of Mosul and the people’s desperate struggle to flee to safety has come from the city’s Chaldean bishop.

Speaking on Wednesday to the Catholic charity, Aid to the Church in Need, Archbishop Amel Nona said he thought Mosul’s last remaining Christians had now left a city which until 2003 was home to 35,000 faithful.

The Christians are among 500,000 thought to have fled Mosul whose overthrow yesterday is now followed by news today  of militant attacks on the Iraqi city of Tikrit 95 miles north of the capital Baghdad.

Describing reports of attacks to four churches and a monastery in Mosul, the 46-year-old Archbishop said: “We received threats… [and] now all the faithful have fled the city. I wonder if they will ever return there.”

Archbishop Nona, who in the ensuing crisis sought sanctuary in Tal Kayf, a village two miles from Mosul, described how the local community were doing their best to provide for crowds of people flooding out of the city and into the surrounding Nineveh plains, where there are a number of ancient Christian villages.

“Up at 5am yesterday [Tuesday, 10 June] morning we welcomed families on the run and we have tried to find accommodation in schools, classrooms and empty houses. We have never seen anything like this – a large city such as Mosul attacked and in chaos.”

He said that in the 11 years following the 2003 US-led overthrow of Iraq’s President Saddam Hussein, Christians in Mosul had declined from 35,000 to 3,000 and that “now there is probably no one left.”

The Archbishop said the attacks on Mosul began last Thursday (5 June) but were initially confined to the western part of the city.

“The army began bombing the affected areas but later in the night between Monday and Tuesday, suddenly the armed forces and the police left Mosul, leaving it to the mercy of the attackers.”

The Archbishop questioned reports claiming the militants responsible for the attacks are part of the Islamic State of Iraq and Levant (ISIS), a terrorist organisation linked to Al-Qaeda and in control of key areas of north-west Syria.

“I do not know yet who the group is behind these attacks. Some speak of ISIS, others think other groups are responsible. We have to wait until we have a better understanding of the situation. What we do know is that they are extremists, many people have seen them patrolling the streets.”

BBC reports have described ISIS’ ambitions as the creation of an Islamist caliphate spreading from northern Iraq across to north-west Syria.

From ISIS-controlled regions in Syria have come reports of Christians being asked to pay the Islamic Jaziya tax and pressure to convert to Islam. Many thousands of Christians have fled the region.

As a Catholic charity for persecuted and other suffering Christians, Aid to the Church in Need has for many years been providing emergency relief for faithful fleeing Iraq, initially to neighbouring Syria and now to Lebanon and Jordan.