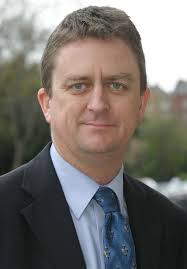 The Irish government is badly out of step with public opinion on equal financial support for stay-at-home mothers, the Iona Institute Director David Quinn has stated.

He was responding to an Irish Daily Mail poll that has shown that 65 per cent of people surveyed think that parents who give up work to raise their children should receive the same level of financial support, or more, than those who go out to work and use crèches and other childcare facilities.

Speaking about that poll published on the front page on 23 August 2017 and CSO* figures he said: “The poll shows that the government is badly out of step with public opinion on this issue. While Taoiseach Leo Varadkar indicated earlier this week that the government also supports home care, all the indications are that institutional day care will be heavily favoured in the next budget.”

Currently only parents who send their children to Tusla approved/registered crèches can avail of incentives of up to €7,500. Neither stay-at-home parents nor their relatives can avail of this support, though they can avail of a tax credit of just over €1,000.

David Quinn stated that if the government does not heed public opinion, then Fianna Fáil and the other opposition parties ought to.

“The State should not favour one particular childcare choice over another, in this case institutional day care. The State should allocate resources in such a way as to financially support the various choices parents want to make about the care of their children during the day,” he said. 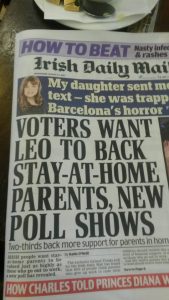 Ireland Thinks interviewed a random sample of 1,200 adults aged 18+ by telephone in February.

The Stay-At-Home Parents Association also welcomed the poll findings, saying the findings did not surprise them and that all children and parents should be treated equally.

*A recent CSO study found that 70 per cent of parents mind their pre-school and primary school children at home, while only 13 per cent use day care. It also found that 82 per cent are happy with their current choice.