Home > Featured > Investment not tax cuts for better future for all 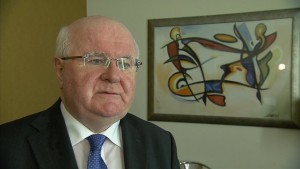 Ireland is under-investing in education, social housing and rural broadband and must prioritise investment over tax cuts in Budget 2018 according to Social Justice Ireland.

Speaking at the National Economic Dialogue in Dublin Castle on Wednesday 28 June, Dr Seán Healy, Director, Social Justice Ireland said: “Ireland has control of budgetary decisions regarding its taxation and expenditure. Most people want to see reductions in healthcare waiting lists, increases in social housing provision and reliable high-speed broadband across rural Ireland. To achieve this means there should be no net tax cuts in Budget 2018.”

However, speaking at the same meeting in Dublin Castle the new Taoiseach Leo Varadkar said he wants income tax cuts and that they could be funded by increasing other taxes or what he called the “hidden fiscal space”, where money is reallocated away from other programmes that are not delivering.

Dr Healy said that long-term policy goals that benefit all must take precedence over short-term gains for the few. So Budget 2018 should include a multi-annual investment plan to tackle Ireland’s infrastructure deficits, prioritising education, social housing and broadband in the forthcoming budget.

“Increased investment in education, social housing and broadband in Budget 2018 will yield significant returns in terms of both employment and productivity, and will also address two of the largest infrastructural deficits in Ireland today,” he said.

He explained that if Ireland is to have strong long-term macroeconomic stability and a vibrant economy, then a substantial increase in the level of public investment is required. Comparing Ireland to other western European societies, he said that most of them provide a far more comprehensive programme of public services and social infrastructure than Ireland.

Social Justice Ireland (SJI) is an independent think tank and justice advocacy organisation that offers independent social analysis and policy development suggestions that could help create a sustainable future for all members of society.

Michelle Murphy, Research and Policy Analyst, SJI, spoke about Brexit, stating that it should not paralyse Ireland’s response to vital national challenges.

“The best way to ensure those sectors and regions that will be most affected by Brexit are best prepared and supported is to invest in areas in which Ireland is deficient such as social housing, broadband, public transport, skills development and childcare,” she said.

The lack of investment in education was also recently highlighted by The Society of St Vincent de Paul’s Tricia Keilthy, who stated that under-investment in the education system is preventing too many children, young people and second chance learners from reaching their potential.

The Society of St Vincent de Paul (SVP) has also called on government to value and prioritise investment in the education system, and stated that this can have a “transformative effect” on people who experience poverty and disadvantage.

SVP members see how school costs continue to prevent disadvantaged younger children from participating in school. Costs also remain a barrier to participation at third level, and SVP are concerned about the low rate of progression to further and higher education by disadvantaged and non-traditional students.

This year, in its Pre-Budget Submission, SVP called on government to reverse the changes to the student grant and expand eligibility to part-time students as a first step.