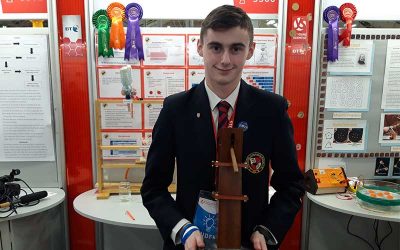 The invention of a water filtration system has earned a young scientist a trip to Africa with Self Help Africa.

Seán Byrne from Avondale Community College in Wicklow won the Science for Development Award at this year’s BT Young Scientist & Technology Exhibition with an invention that addresses one of the most pressing health challenges in developing countries. His invention relies on the absorbent properties of eggshells to purify heavy iron contaminated water, using a filtration system that he devised himself.

The award, run by Self Help Africa and with a €5,000 fund provided by Irish Aid, will enable Seán Byrne and his teacher to travel on a school study visit to one of the countries where Self Help Africa works to further this project.

“I am aware that contaminated water is a global problem. In developing countries, 14,000 people die each day because of water pollution. I wanted to help find a solution to that problem,” said Seán Byrne, who thinks his prototype could be replicated in the developing world with locally available material.

The Leaving Cert student explained that in his system the water goes through a sand filter first to remove suspended solids before it goes through vessels that contain eggshells for purifying. Then UV lights and a second sand filter further clean the water. It is capable of removing almost 100 per cent of metal contaminants present in water, including copper, lead and chromium. The system has the added benefit of removing microplastics from the water. 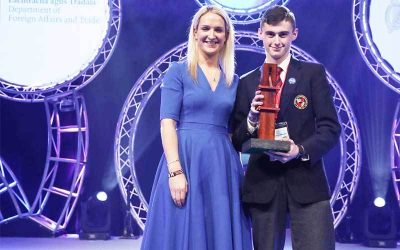 Minister Helen McEntee presented the Wicklow teenager with the Science for Development Award, which is in its 14th year.

This year there were 550 exhibits displayed in the RDS by 1,134 students from 246 schools. Of the 550 projects, 88 explored climate change and environmental issues, responding to challenges caused by excessive carbon emissions and toxic refuse generated by excessive lifestyles.

Organisers said that each year they see more contenders for the Science for Development award. The judges look for evidence that the students have made the link to global issues and to people with fewer resources.

Other contestants also addressed the issue of pollutants in water. Boys from Moate Community School looked at Zambia, which is rich in heavy metals such as copper, cobalt and lead that can be found in water in high concentrations, adversely affecting the health of local people. The boys created an affordable solar distillation process that households could use. Young Scientists from Terenure College developed a detection and treatment system for the presence of legionella in water.

Students from Desmond College in Limerick sought to stop the march of the fall armyworm that moves in huge numbers between feeding sites and can strip whole fields of maize bare, causing great hardship for poor families who lose food and income. The students devised a trap for the adult moths using discarded plastic bottles, small lights and locally sourced sugar cane.

A student from St Angela’s College, Cork won the Trinity College Global Challenges Award with her project, which focused on an easily maintained and affordable solar-powered school in a box to be used in areas with limited electricity and few teachers, such as refugee camps.

Growing food where space and soil are limited was explored by Ardscoil na Mara in Waterford, which won second prize in the Intermediate Individual Section with a project that grows plants using vertical farming. Scoil Mhuire in Donegal demonstrated a solar-powered aquaponic system to grow iron-rich crops like spinach without chemical fertiliser. Nutrients come instead from waste water from a fish tank.

Other projects focused on treating the problems at source, like creating bio plastic from potato or food waste. A first year student from Marist College, Athlone recycled waste soft plastic by chopping it and baking it into durable bricks.