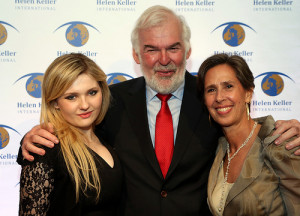 Helen Keller International is one of the oldest global non-profit organisations devoted to preventing blindness and reducing malnutrition.

The presentation was made last Tuesday in New York at a gala event which raised over $1 million for sight and lifesaving efforts in Africa, Asia and the United States.

Announcing that Tom Arnold was the 2014 recipient of the award, Helen Keller International said he was being honoured in recognition of his extraordinary dedication to ending child hunger and improving maternal health in the developing world.

His achievements listed included his successful tenure as CEO of Concern Worldwide from 2001-2013.

In 2012, he was appointed by Secretary General of the United Nations, Ban Ki-Moon, to the Lead Group of the Scaling Up Nutrition (SUN) Movement.

The award was presented by Ambassador David Donoghue, Ireland’s permanent representative to the United Nations.

In his acceptance speech, the former CEO of Concern said, “To be connected with an award named for Helen Keller, whose life was about unleashing human potential, is both an honour and a humbling experience.”

In her address, Kathy Spahn, Helen Keller International’s President and CEO, said, “For decades, Tom Arnold has been an incredible force, generous partner and a wonderful inspiration in the fight against hunger.”

“Hunger continues to be one of the world’s most pervasive challenges, impacting the life expectancy of innocent women and children, as well as the potential for growth and prosperity of entire nations.”

“We are truly honoured and delighted to be able to celebrate the invaluable contributions Tom has made in keeping the global spotlight on this issue and joining Helen Keller International in building sustainable solutions that will lead us to a stronger, healthier world.”

“Helen Keller was a remarkable person whose passion for life and commitment to improving the lives of others was inspirational and unstinting. We must be relentless in tackling the unacceptable injustice of global hunger and under-nutrition.”

It was announced at the same event that Oscar-nominated actress, Abigail Breslin, is to serve as Honorary Junior Chair with Helen Keller International.

Dominic MacSorley, Mr Arnold’s successor as CEO of Concern Worldwide, commented, “This award is truly well-deserved and all of us in Concern are so proud of Tom, who continues to be a true champion for ending global hunger.”

In 2012, Mr Arnold joined former President Mary Robinson on the Lead Group of the Scaling Up Nutrition (SUN) Movement, having been appointed by Secretary General of the United Nations Ban Ki-Moon.

Set to run until the end of 2015, the SUN Lead Group is a high-level international working group charged with providing leadership to a global project aimed at tackling child hunger in the world’s poorest countries.

It also includes the prime ministers of Bangladesh, Nepal and Namibia, and the presidents of Mozambique and Tanzania. It is chaired by Mr Tony Lake, Executive Director of UNICEF.