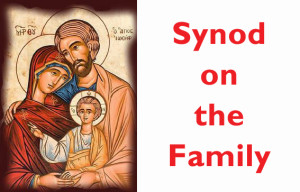 The Vatican has published the working document or Instrumentum Laboris for October’s Synod of Bishops devoted to “the vocation and the mission of the family in the Church and in the contemporary world”.

The working document provides a starting point for discussion.

It is the product of a period of reflection by episcopal conferences around the world on the final document of last October’s extraordinary synod on the family.

That final document or relatio synodi was sent to episcopal conferences, along with 46 questions, and the responses have produced the lineamenta for this year’s synod.

The synod, which takes place between 4-25 October, will be structured to cover those three areas in succession according to Cardinal Lorenzo Baldisseri, secretary general of the Synod of Bishops.

Issues such as communion for the divorced and remarried are covered by the third part of the Instrumentum Laboris.

The 78-page document reiterates Church teaching on marriage as a sacramental, lifelong commitment between a man and a woman. It criticises abortion, forced sterilisation, fertility treatment procedures such as surrogacy and indicates that there is unlikely to be any change in Catholicism’s stance on gay marriage.

It decries “the extremely negative consequences of practices tied to procreation,” specifically mentioning “wombs for rent or the market in embryonic cells.”

The document suggests that divorced and remarried couples should be “integrated” into the Church.

Referring to the relatio synodi, it states that “some synod fathers maintained that divorced and remarried persons or those living together can have fruitful recourse to a spiritual communion. Others raised the question as to why, then, they cannot have access to sacramental Communion.”

The working document underlines that the “journey of incorporation into Christ” is “implemented step by step through continual conversion.”

Citing the teaching of St John Paul II in his 1981 apostolic exhortation on the family, the working document suggested that those who have remarried can participate in the life of the Church in various ways, such as Mass attendance, prayer, and works of penance and justice.

“The result of this participation is the communion of the believer with the whole community,” the working document states.

It also refers to the practice in the Orthodox Church of “pastoral condescension towards a failed marriage” under the authority of the bishop or accompanied by a priest. This was raised at last October’s synod by Cardinal Vincent Nichols.

On Tuesday, Cardinal Baldisseri revealed that the Secretariat General of the Synod of Bishops received 99 answers from the competent bodies, along with 359 observations sent freely from dioceses, parishes, ecclesial associations, grass-roots groups of faithful, civil movements and organisations.

The inter synodal period, the Vatican Cardinal said was “a valuable opportunity for listening to what the Spirit says to the Church in the plurality of her components”.

In relation to the methodology of the upcoming General Assembly, it was mentioned that this is an Ordinary and not an Extraordinary synod like the previous one and, in accordance with the suggestions of the members of the Synod, “it will continue with the project of the development of the Synod taking a dynamic approach more suited to our times”.

With regard to information during the Synod Assembly, the Pope has affirmed that “the Synod is a space in which the Holy Spirit can act, not parliament”.

The 200 Synod Fathers are invited to “express themselves with parrhesia. They will be free to communicate with the media at their discretion and with responsibility”.