A group made up of families with children who have or had life limiting illnesses wrote to more than 200 consultant obstetricians and gynecologists in maternity units across Ireland this week, asking them to discontinue using the label ‘incompatible with life’.

They say the label prevents best care for children and families both before and after birth.

Every Life Counts is made up of parents whose children were diagnosed with life-limiting conditions, such as anencephaly or Trisomy 13. Many of the families had children who lived for very short periods of time.

In the letter, the group told doctors, “We were told that our babies were ‘incompatible with life,’ even though the phrase is not a medical diagnosis. It is a misleading term, it does not inform parents about the condition affecting their child, and it is hugely offensive.”

They added that they knew it was not the intention of medical staff to mislead or offend parents but pointed out “as you will see from our testimonies, the term misinforms parents and makes them feel their child is devalued.”

Testimonies in the letter include that of Mandy Dunne whose daughter Muireann was diagnosed with Patau’s Syndrome or Trisomy 13, when she was 20 weeks pregnant.

“I was told the condition was ‘incompatible with life’. I felt those words took her life from me there and then.”

Ms Dunne said the doctors made her feel she wasn’t carrying a beautiful little girl, but “merely a mass of disfigured cells that was supposed to be a baby but wasn’t; that she didn’t even have the right to be considered as a life, even as she was alive and kicking inside me.”

In the letter, mothers like Mandy Dunne and Sarah Hynes point out that their children did go on to live after birth.

“They were two wonderful days that we will never forget, we held him in our arms the whole time he was with us, and we are so proud of him, so proud to call him our son,” she recalled. 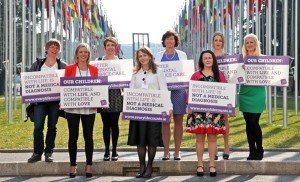 The appeal to medics to stop using the label is part of an international campaign begun at the United Nations in Geneva on 11 March when the  Geneva Declaration on Perinatal Care  was launched.

Already 370 medical professionals have signed the declaration and a further thirty-six disability and advocacy groups have endorsed it.

Doctors and families with children with a life limiting condition may sign the appeal at: http://www.genevaperinatalcare.com.

As part of the campaign, Fianna Fáil TD Mattie McGrath is introducing a Private Members Bill at the end of this Dáil term to prohibit the use of the term.

Every Life Counts is calling on Consultant Obstetricians & Gynaecologists in Ireland to support the initiative and to make better care available for families.

They welcomed the recent call by Dr Sam Coulter-Smith of the Rotunda to make resources available for perinatal hospice-type care, the IMO’s decision to support better perinatal care for unborn children with life-limiting conditions.

Tracy Harkin, PRO for Every Life Counts told CatholicIreland.net there was a great need for perinatal care.

“We need to surround parents with the best of perinatal care, with love, with an affirmation of the value of that child no matter how short his or her life is.”

“This is the hallmark of a civilised culture,” she added.