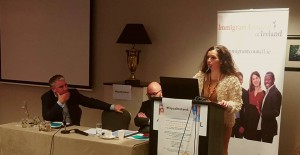 New research has found evidence of Islamophobia in Dublin including verbal and physical attacks on Muslims and buildings such as mosques.

At the launch of the research, Brian Killoran, Chief Executive of the Immigrant Council of Ireland said, “Combating hate crimes and discrimination in terms of access to employment, schools and services is highlighted across the findings and addressing these must be the priority.”

“However change must go beyond legislation and include awareness programmes, training and greater understanding.”

The research was conducted by Dr James Carr of the University of Limerick and cites examples of attacks on two mosques and private properties which involved graffiti and bricks thrown through windows.

One participant in this research, Maryam spoke of returning with her family to their home only to find it had been ransacked and painted with graffiti which implied that a Muslim family was not welcome in that area.

Attacks on people range from verbal abuse to being spat at, right up to being beaten.

For example some Muslim men in Cork were beaten with sticks by a group of men who had travelled specially to attack them. In Limerick, a Muslim man had beer bottles thrown at him and he was verbally abused.

Women are twice as likely to experience anti-Muslim hostility when compared to Muslim men.

They are very visible when they wear a headscarf, hijab or niquab.

A Saudi Arabian postgraduate student in Trinity College was verbally and physically abused by a man while on public transport.

A publicised case was when a woman refused treatment from a consultant in hospital who was a Muslim woman wearing a headscarf. The Irish patient insisted on being treated by a non-Muslim doctor.

Even Muslim children are the target of abuse. A 10 year old Muslim girl was “pushed, shoved and hit” by a group of young people at a playground.

Another issue which the research highlights is that people associate Muslims and Islam with terrorism and the so called ‘War on terror’, and this makes it more difficult for Muslims living in Ireland.

The report looks in particular at the places where people experience discrimination, for example in education, on public transport and using other public services, in accessing employment and in shops and restaurants.

“The recommendations are wide-ranging and will require change in almost every area of official policy not just for lawmakers, but for schools, employers, the Gardaí and many others including civil society organisations such as the Immigrant Council,” said Brian Killoran.

In education, the subject of Catholic Church patronage and school enrolment policies comes up.

Those surveyed are concerned with getting children and teenagers into their school of choice either for academic reasons or to join their friends from primary school or from their neighbourhood.

The report states that this is more of an issue with secondary schools than with primary.

It also states that the Catholic patronage “makes it difficult for teachers of other faiths or no religion” to work in this sector.

It claims that there is some failure on the part of staff to address anti-Muslim racism in the classroom. There are also issues around the lack of policy on whether female students can wear the hijab if they choose to do so.

In his foreword to the report, Brian Killoran states that the report also offers hope as many Muslim people refer to Ireland as “home” and it is home to 65,00 Muslim men women and children.

“Muslim communities are a part of Irish society and make an enormous contribution,” he concluded.

“We all must work together to ensure that Ireland remains a place of welcome and a home for all members of our society.”