‘I come as a pilgrim of peace’ – Pope Francis in CAR 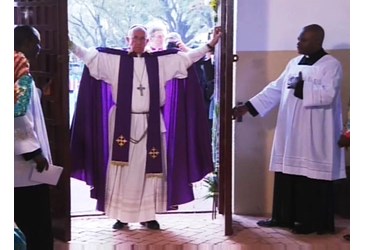 On Sunday, Pope Francis opened a holy door in the Cathedral of Bangui, the capital of the Central African Republic, just ahead of his inauguration of the special Jubilee of Mercy on 8 December in the Vatican.

Addressing the country’s political authorities as well as members of the diplomatic corps at the start of the final leg of his three-country African visit, the Pontiff told his listeners, including the interim President, Mrs Catherine Samba- Panza, that he came “as a pilgrim of peace and an apostle of hope”.

He appealed to all sides in the country to push forward reconciliation, disarmament, peacekeeping, health care and the cultivation of a sound administration at all levels.

The Pope’s opening of the Holy Door at Bangui Cathedral is a symbolic gesture underlining the country’s need for mercy and reconciliation in the wake of the ethnic and religious violence it has witnessed over the past two years.

The conflict between the Muslim Séléka forces and Christian anti-Balaka forces has caused tens of thousands to flee into neighbouring countries and has prompted warnings from the UN of the potential for genocide if peace efforts fail.

CAR, which gained independence from France in 1960, is one of the poorest countries in the world despite its agricultural, water and mineral resources, including uranium reserves, gold, timber and diamond industries.

Sunday’s papal highlights included a visit to the St Sauveur refugee camp, a meeting with CAR’s bishops and local evangelical communities as well as a prayer vigil at the Cathedral following the opening of the holy door.

During his visit to St Sauveur refugee camp in Bangui, which houses some of those displaced by the Central African Republic’s (CAR) sectarian violence, the Pope told the displaced, “We are all brothers, regardless of our ethnic or religious group.”

In off-the-cuff remarks to those in the camp, the Pope added, “We must work, pray and do everything possible for peace.”

But he also warned, “Peace is not possible without love, without friendship, without tolerance and without forgiveness.”

Surrounded by children, the Pope said he had read what the children had written: “peace, forgiveness, unity and love.”

“My wish,” he continued, “is that you can live in peace, regardless of your ethnic group, your culture, your religion and your social background… everybody living in peace because we are all brothers.”

He then urged those present to repeat the words, “We are all brothers,” saying it was for this reason that “We want peace.”

Pope Francis on Sunday made a brief, unscheduled stop at a children’s hospital in Bangui, where he met some of the young patients and staff, and delivered boxes of medicines provided by Rome’s Bambino Gesu paediatric hospital.

In his homily at Mass in the Cathedral, the Pope spoke of the Christian vocation to love our enemies, saying it protects us “from the temptation to seek revenge and from the spiral of endless retaliation.”

“On this first Sunday of Advent, the liturgical season of joyful expectation of the Saviour and a symbol of Christian hope, God has brought me here among you, in this land, while the universal Church is preparing for the opening of the Jubilee Year of Mercy. I am especially pleased that my pastoral visit coincides with the opening of this Jubilee Year in your country,” the Pope said.

He emphasised that those who evangelise must be first and foremost be practitioners of forgiveness, specialists in reconciliation, experts in mercy.

“This is how we can help our brothers and sisters to ‘cross to the other side’ – by showing them the secret of our strength, our hope, and our joy, all of which have their source in God, for they are grounded in the certainty that he is in the boat with us.”

He appealed to “all those who make unjust use of the weapons of this world: lay down these instruments of death! Arm yourselves instead with righteousness, with love and mercy, the authentic guarantors of peace.”

Addressing CAR’s priests, religious and lay pastoral workers, in a country situated in the heart of Africa, he told them their vocation was to “incarnate the very heart of God in the midst of your fellow citizens”.

Pope Francis is scheduled to conclude his pastoral visit to Africa today with a visit to the mosque in Bangui, followed by a Mass marking the feast of St Andrew in the city’s sports stadium.

The visit to the Central African Republic concludes his Apostolic journey to Africa, marks his first to this continent, and his 11th journey abroad.