Home > News > Human trafficking is a real problem in Ireland

Human trafficking is a real problem in Ireland

Human trafficking is a real problem in Ireland today Archbishop Diarmuid Martin of Dublin has warned and he said the Church and voluntary organisations have a real responsibility to address the problem.

Speaking at the end of Mass for World Day of Peace in the Church of the Three Patrons, Rathgar, Dublin, Archbishop Martin told the assembled members of the Oireachtas and the Diplomatic Corps that the problem of human trafficking is a world-wide challenge.

“Very often, however, when we think of a challenge as being world-wide, we immediately think that it is a problem that exists somewhere else and not close to us,” he said.

He acknowledged that it is difficult to establish the real extent of human trafficking in Ireland.

“This does not mean that the problem does not exist. It does exist and it exists right down to smaller communities across the country.”

The Archbishop said that hidden in Irish society there is a serious problem of people who are the victims of trafficking.

He explained that he has been part of an initiative supported by Pope Francis called ‘The Santa Marta Group’, composed of Church leaders and police leaders in various parts of the world including an Garda Síochána.

“While police authorities are taking a lead in the area of trafficking there is also a real responsibility of Church and voluntary organisations to address the problem.”

“Many of those who are trafficked and who live in small Irish communities feel trapped in a world which is heavily controlled.”

Archbishop Martin said there are “many ways in which local communities can help identify these people who want to free themselves but are fearful of those who manage them”.

However, he observed that it is easy to simply take no notice of them.

“How can we tolerate that the practice of human trafficking can go on under our noses not just in our anonymous large cities but even in small communities?,” he asked. 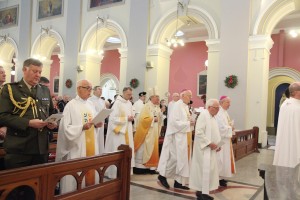 Archbishop Diarmuid Martin in the procession at the beginning of the World Day of Peace Mass in the Church of the Three Patrons Rathgar in Dublin on New Year’s Day. Pic John Mc Elroy.

He concluded the Mass by praying for all those who “suffer exploitation in the midst of our communities and that our communities will become ever-more attentive to those are most fragile within them.”

The theme for this year’s Mass for World Day of Peace, chosen by Pope Francis is ‘Slaves No More, but Brothers & Sisters.’

The homilist at the Mass, Mgr Eoin Thynne, is Head Chaplain to the Irish Defence Forces.

In his homily Mgr Thynne said “Trafficking in human beings is one of the greatest scandals and tragedies of our age. It is intolerable that millions of fellow humans should be violated in this way, subjected to inhuman exploitation and deprived of their dignity and rights.”

He recalled that Pope Francis has said: “Human trafficking is an open wound on the body of contemporary society. It is a crime against humanity.”

He said the outrage of human trafficking should concern each one of us, because what affects one part of humanity affects us all.

“Virtually every part of this world is touched in some way by the cruelty and violence associated with this criminal activity,” Mgr Thynne said.

Referring to the one hundred and thirty four wars raging in our world today, he said one of the greatest is the war of oppression.

“Imagine being forced to work without pay, unable to walk away, subject to constant threats and violence. This is the daily reality for millions in modern slavery. Modern slavery takes many forms, and is known by many names.”

“History tells us that slavery was abolished in the eighteen hundreds, but today, slaves are trapped in fishing fleets and sweatshops, mines and brothels, and in the fields and plantations of countries across the world.”

“It can be called human trafficking, forced labour, or it can refer to the slavery-like practices that include debt bondage, forced or servile marriage, and the sale or exploitation of children.”

He told the congregation in the Church of the Three Patrons that no matter what it is called, victims of modern slavery have their freedom denied, and are used, abused, controlled, and exploited by another person for commercial or personal gain.

“While it is illegal in all countries, the facts show modern slavery exists in every society and across a wide range of industries, imprisoning thirty six million people. There is a responsibility on all of us to bring an end to this war.”

He said ending slavery not only extinguishes an injustice but sets people free and enables them to contribute to their community thus creating prosperity.