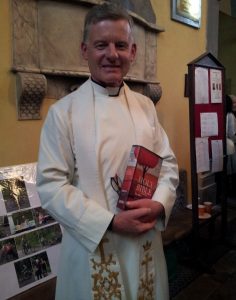 Former leader of the Green Party and Minister of State, Trevor Sargent, has warned that Ireland must do more to tackle homelessness.

Speaking to media about the homelessness crisis following his ordination at the Church of Ireland’s Christ Church Cathedral in Waterford on Saturday, Rev Sargent described homelessness as a mirror to Irish society.

“As long as we tolerate homelessness, it is a reflection on our politics which is a result of how people vote – and that needs to be thought about very seriously,” he said.

As a priest, he said he saw himself “ordained to play a role in providing whatever respite and solution there can be to this issue”.

Asked about his decision to move from politics into ministry, the former government minister said that while the two paths might seem contrasting, there was, in fact, an element of service and pastoral care present in teaching, politics and ministry.

Rev Sargent taught for 30 years in Cork and Balbriggan before he got involved in politics. He was elected as a TD in 1992 and led the Green Party between 2001 and 2007. He lost his seat in the 2011 election, after serving as a Minister for State for Food and Horticulture.

“In a way it is not such a contrast as it might appear from the outside. It is also a fuller type of service because one is dealing with the sacred, with silence, with people who are in distress – in a very confidential way and a very personal way, as well as being at the heart of praying for a better society.”

He stressed that climate change is a key area for the Church of Ireland and paid tribute to Pope Francis and Laudato Si for giving people licence to be “active and quite strident in doing what needs to be done to ensure the next generation is not [seeing] islands submerged as a result of climate change”, as is happening in the Pacific Ocean. 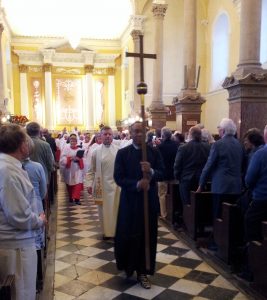 Rev Sargent will serve in the Waterford Union of four parishes, incorporating Waterford City, Tramore, Dunmore East and Annestown. Following his ordination, he will live in the rectory in Tramore beside the church. “You might as well say I am living over the shop, I’ll be on call where I am living in the parish.” Days off will be spent at his home in Curracloe, Co Wexford, with his wife, Aine Neville.

His first Holy Communion service took place at 10am on Sunday morning in Waterford Cathedral. Afterwards he travelled to his own parish of Tramore to celebrate Holy Communion for his parishioners, his parents and family.

Although Rev Sargent’s wife is Roman Catholic, he said she and her family, particularly her recently deceased mother Marie, who was a sacristan in the Catholic parish of Curracloe, were “very supportive” of his move into ministry. Ms Neville’s mother, who died in June, was at his ordination as a deacon in Shillalagh, Co Wicklow, in August 2017.

The ecumenical input into his faith was signalled by the presence of people such as the Roman Catholic parish priest of Curraloe, as well as the Roman Catholic administrator of the Cathedral of the Holy Trinity in Waterford, Fr Edmund Cullinan, who was the first person to call on Rev Sargent in Tramore. “That is an indication of the level of outreach and goodwill that exists between different traditions in Waterford,” Rev Sargent said.

In Tramore, he will be involved with a surf and youth ministry project where young people learn how to surf to a very high standard while also learning about faith.

Asked about the 2016 census figures which show membership of the Church of Ireland is on the rise, Rev Sargent said one factor was the Church’s involvement in tackling climate change and other ecological challenges which had given it a “relevance among people who mightn’t have seen the Church as meaningful from their point of view in the past”.

As chairperson of Cumman Gaelach na hEaglaise, he also highlighted that attendances at Irish language services are on the rise, thanks to those interested in Celtic spirituality.

“We will be introducing a service in Irish,” he explained. The church is also looking at introducing a healing service and a number of other initiatives such as a Taizé service in Dunmore East.

“Having been to Taizé and appreciated the ecumenical nature of Taizé, I felt this would be something that would be immensely nourishing for Waterford, given the multicultural nature of the city.”

Speaking to CatholicIreland.net, Mr Ryan noted that Rev Sargent has always had a “strong faith”.

“You don’t mix politics with religion, but at the same time we knew that was where he was coming from. It is not that different a world in some ways in the sense that what you do as a politician is in some ways similar to what you do for your constituents and your congregation. His friends have a sense of pride and admiration for him. I think this is the start of a journey for him.”