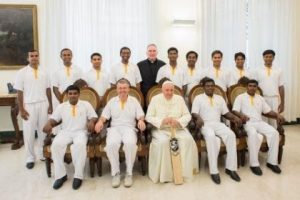 Howzat! A Vatican cricket team is on a ‘Light of Faith’ tour of England aimed at building good inter-church relations while demolishing wickets.

It’s the fourth such tour for St Peter’s Cricket Club, which was founded in 2013 by a group of cricket-crazy seminarians studying for the priesthood in Rome. Also known as ‘the Vatican Cricket Team’, St Peter’s CC operates under the patronage of the Pontifical Council for Culture because of its role in promoting interfaith dialogue.

This year’s 12-day tour opened yesterday, Tuesday, with a match against a team of scholars from Stonyhurst, the prestigious Jesuit college in Lancashire. Tomorrow, Thursday, they travel to London to form an inter-Christian side with members of the Archbishop of Canterbury’s XI and together they will play a match at Lord’s, the home of cricket, against an interfaith side that has Muslim, Sikh, Hindu, Buddhist and Jewish bowlers, batsmen and fielders.

Other fixtures in the tour include a match against members of the UK’s Houses of Parliament at Westminster and a match in Windsor against members of the Royal household. There is also a one-day match to be played against a team at a prison for young offenders, where a Mass with some of the prisoners will also be celebrated.

In addition to meeting members of other faiths on the field of play, the Vatican players will also visit a mosque, a Sikh gurdwara, a Hindu temple and a synagogue.

Sadly, the St Peter’s team will not be visiting Ireland on this occasion. Last year, for the first time, an Irish team played against the Vatican team in Italy. The Irish team was made up mainly of middle-aged journalists and they were roundly beaten by the more youthful squad of seminarians.

One of the joys of cricket is that it lends itself to puns – for example, when the batting team fails to score any runs off six deliveries of a ball, the fielding team is said ‘to have bowled a maiden over’. That is something that a seminarian wouldn’t boast of in any other context outside of cricket.

In the UK, diocesan cricket matches are a fixture of summer clerical life among members of the Church of England, with the result that the Archbishop of Canterbury’s XI is a particularly strong team, with a three-to-one win record over St Peter’s CC. In Ireland of course, the chief participation sport for clergymen is just not cricket! It’s golf!