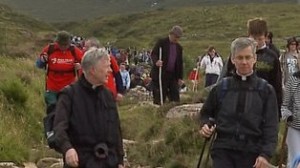 In his homily for Reek Sunday, given on the summit of Croagh Patrick during the 10.30am Mass, the Archbishop called for provision to be made for the ‘Religious Voice’ to be heard as a fundamental human right.

He said denial of this right was an attempt to “corral religious believers” and it also excised their contribution to important discussions about the kind of society that twenty-first century Ireland should have.

He warned that this reduced religion to the private sphere and prohibited it from influencing public life.

“A mature secularism would welcome and provide space for religious believers in the public sphere,” he said while a mature Catholicism would make its contributions with courtesy and respect for those with whom it disagreed.

He added that a truly liberal atmosphere “not only permits but actively encourages the Church’s voice.”

Explaining the reason the Church seeks to make a contribution to public debates, the Church leader said it did not seek to have its moral teaching enshrined in law simply because they were Church teachings.

“Instead, the Church proposes that a particular issue, on which she has clear moral teaching, ought to be safeguarded in civil law.

Speaking about the implications of a weakened faith, he warned that it risked weakening the foundations of humanity.

The light of faith can never allow us to forget the sufferings of this world.  The service which faith provides to the common good is always one of hope.

“Religion and faith are persisting features of the human situation and will not disappear so long as we ask the fundamental questions of why we are here and what kind of world we seek to create.”

The leader of the Church in Tuam also underlined in his homily that serving the common good is a key criterion for political and civil leaders.

Speaking about the Croagh Patrick pilgrimage, Dr Neary said the occasion provided people with an opportunity to get a clearer perspective and meaning to their vulnerability and to adjust their relationships in two areas – in relation to nature and the economic crisis.

Climbing Croagh Patrick “enables us to recognise our relationships with others in the way in which we negotiate our own and other people’s frailties.  We become conscious of weakness and powerlessness.”

This, the Archbishop said, ought to help us respect what is at risk in the life of another and to work on behalf of another’s need.

Reflecting on recent economic woes, the Archbishop said that many believe greed was the underlying problem.

“I wonder whether pride may have been an even more significant contributory factor, the pride that refuses to acknowledge my lack of control over the environment, my illusion that I can shape the world as I wish.”

He strongly criticised the misuse of freedom by the few at the expense and enslavement of many to poverty and deprivation.

“Real change can come only through freeing ourselves from the illusions which enslave us,” he warned.

He underlined that empathy plays an important role in developing a kind of intelligence that will reflect on who we are will help as well as to control and limit a purely technical approach to others. Faith, he said, can play a role in developing a more empathetic thinking.

Archbishop Neary described the Reek Sunday as a “great festival of faith” and said this annual festival on the last Sunday of July had for so long been a great place of gathering for so many generations to take stock of their lives.

Speaking about faith and pilgrimage, he said they were inter-related. “In this Year of Faith…  the Church ought to be about gathering, about embrace, about welcoming home all sorts and conditions of people.  Home is a place of the mother tongue, of old stories told and treasured, of being at ease, known by name, belonging without qualifying for membership. The ministry of gathering is one to which God has always been committed and one which is central to the ministry of Jesus Christ and his Church.”