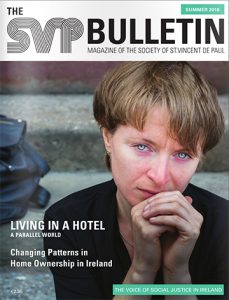 The homeless crisis in Ireland has not improved since the death of Jonathan Corrie, the homeless man who died in a doorway in Dublin close to Leinster House in 2014.

This is according to Linda O’Connell of the Society of St Vincent de Paul (SVP).

Writing in her blog promoting a special edition of the SVP Bulletin titled ‘Homelessness and Housing’ she highlights how his death “sparked a national conversation about homelessness but many campaigners feel the situation has not improved since then.”

Linda O’Connell also refers to UN Reports published in June 2016 which found that more than 700 of Cork city’s 120,000 inhabitants were homeless.

“Widespread homelessness is evidence of the failure of the State to protect and ensure the human rights of the most disadvantaged populations,” said Ms Leilani Farha, UN special rapporteur on adequate housing. 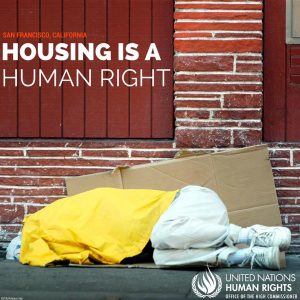 The report stated that the number of homeless has risen due to the lack of affordable housing and the impact of austerity measures.

Rent allowance allocations available to individuals and families by the city of Cork are “reportedly grossly inadequate” in relation to the cost of housing in the private market.

Tenants with low or irregular income have no protection from sudden increases in rent, forcing them to either move out or face eviction, often resulting in homelessness.

The UN’s Leilani Farha and Léo Heller, special rapporteur on the right to water and sanitation, wrote to the Government in September 2015 and requested a response to their confidential letter within 60 days, receiving a reply eventually on 6 June 2016.

Léo Heller stated his concerns about the lack of facilities for the homeless in Cork.

“It is deeply worrying that there have been no free and adequate public installations for water or public toilets in Cork for the last ten years. This effectively means the denial of access to water and sanitation for the homeless,” he said.

The Government provides some public emergency shelters, but water and sanitation are inadequate in many, he explained.

Some shelters do not open until the evening, and existing ones cannot cope with the growing numbers of homeless people in the city.

This means the alternative for many homeless people in Cork is to look for water and sanitation services from private residents or in bars, restaurants or public institutions.

“This extreme lack of autonomy experienced is a denial of their privacy and dignity, as well as a health concern, as the situation results in access to very low quantities of water and limited access to sanitation facilities,” he stated.

The UN report warned that homelessness is found in every country and is on the increase worldwide.

It calls on member states to recognise homelessness as a human rights crisis and commit to its eradication by 2030, in line with the new UN Sustainable Development Goals.

One of the key factors in rising homelessness is how governments played a part in allowing the expansion of real estate speculation and unregulated markets, which ends up in “treating housing as a commodity rather than as a human right.”

The SVP Bulletin on homelessness highlights the work the Society and what it is doing independently, or in partnership with other agencies, to combat this crisis across Ireland.

For example, it provides accommodation and support via SVP hostels and drop-in centres, as well as in petitioning the government to act.

The magazine includes first-hand experiences from SVP members visiting families living in hotels and emergency accommodation, as well as details of the poor housing conditions in the private sector, and also of the new social housing projects being setup to tackle the situation.