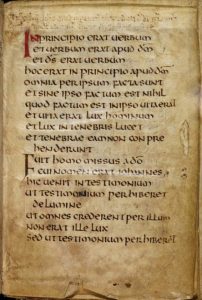 The well-preserved text was written some 1,000 years ago, but is easily readable. (Photo: British Library)

The oldest surviving intact book in Europe, the St Cuthbert Gospel, is to go on display in the British Library in London later this month.

Made in the early eighth century, the manuscript contains a copy of the Gospel of St John and, because it retains its original binding, it is said to be the oldest intact European book.

Measuring less than 14cm x 9.5cm, the book earns its name from the fact that it was found in 1104 inside the coffin of St Cuthbert. Before the death of Thomas Becket in 1170, Cuthbert was England’s most venerated saint.

After his death in 687, Cuthbert became a political saint – in the ninth century, King Alfred the Great of Wessex said his decision to continue fighting the Danes was inspired by a vision of the hermit-turned-bishop. A northern saint paired with a southern king suited those working to unify England as one kingdom.

Because of the Danesmen, and fears of Viking raiders, Cuthbert’s remains were removed from Lindisfarne to Durham in 995 and nine years later, while the remains were being prepared to be installed in a new shrine in the cathedral, the bound manuscript was found.

The shrine in Durham was a major pilgrimage site throughout the Middle Ages until the cathedral was ransacked by Henry VIII’s royal commissioners as part of the dissolution of the monasteries.

The manuscript is bound between two birch boards that have been covered in tanned goatskin that are stained a deep read and then decorated using tooling.

The bound copy of Gospel of St John is believed to have been used as an amulet or talisman, carried by the original owner as a protection from harm.

The St Cuthbert Gospel can be viewed online or you can see the relic itself in an exhibition titled Anglo-Saxon Kingdoms: Art, Word, War, which opens on 19 October.