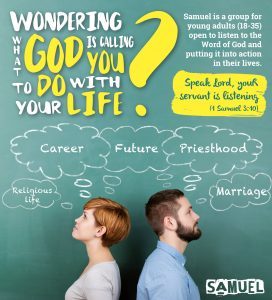 Samuel groups for young people are increasing threefold in Ireland this year. The first ever Samuel in Galway will start on 11 December and the first meeting in Dublin is expected in 2017, with dates to be confirmed. Samuel returns to Cork for a second year and begins on 4 December.

“Samuel is for anyone looking at a big decision in life,” said Fr Alan Neville MSC, Vocations Director, Missionaries of the Sacred Heart, who explained that Samuel is about exploring one’s calling in life.

“There are people who are considering vocation or marriage, but it is very open. It is for those who feel ‘I am at a crossroad in my life, maybe I need to change jobs, go on a course, move, look at my relationship’, that kind of thing,” he told Catholicireland.net.

The group, usually of around ten people, meets once a month for six months. Each meeting starts with a shared meal, where people catch up and chat. At the centre of the meetings is the Lectio Divina prayer with the Bible. There is often a guest speaker and time for discussion.

“It is trying to bring a spirit of reflection in making any decision in life. We look at what are the tools that people need around decision making,” said Fr Neville.

In between meetings there is an individual session with a spiritual director to help with prayer life. The programme aims to give participants a clearer view of God’s will for their lives.

“It is not about getting them to make a decision. It is about helping them to find their own way,” said Fr Neville.

In recent years several Samuel groups have begun in the UK, and in Autumn 2012 a network of Samuel Groups in the UK was launched.

Last year the first Samuel group met in Cork with 13 participants. There are still some places to fill this year in Cork and the Galway and Dublin events are also open for enquiries. 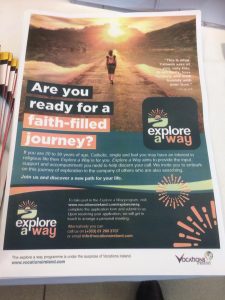 The Samuel Groups, for single young adults (20s and 30s), come under the remit of Vocations Ireland, which also has the Explore a Way programme.

Having been around for a number of years, Explore a Way now has a new look with fresh logos, flyers and promotional posters and a meeting in January 2017 in Co Kildare. Participants are with others who are also searching.

“It was so helpful to journey with others who had similar questions. The group was relaxed and prayerful,” said Rachel, aged 28, who attended a previous programme.

“It made a big difference to look at where God was calling me in my life,” stated James, aged 30, another past attendee.

The weekends explore vocation, discernment, prayer and the lived religious life, presented by people with experience and expertise in these different areas. There is a retreat on one of the weekends so participants can deepen their relationship with God and gain more clarity around where God is calling them.