Home > News > ‘Hear the other side’ Archbishop Martin urges

‘Hear the other side’ Archbishop Martin urges 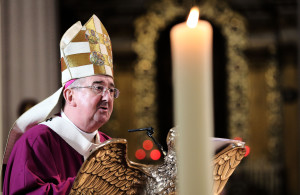 Archbishop Diarmuid Martin of Dublin has said he had great regard for the late Bishop Dermot O’Mahony who “did extraordinary work, touched the lives of so many people” and was “very dedicated”.

Speaking on Sunday after he opened the Door of Mercy at the St Mary’s Pro Cathedral in Dublin as part of the Church’s Year of Mercy celebrations, the Archbishop also admitted that he had had differences with the late bishop.

He said his intention had been not to respond to some of the criticisms made at Bishop O’Mahony’s funeral but as those criticisms were being repeated, he felt an “obligation to the people who work with me and to the truth to clarify these things” which he was doing “in the spirit that I had a great respect for Bishop O’Mahony”.

At the conclusion of the auxiliary bishop’s funeral Mass, Bishop Eamonn Walsh said the society in which Bishop O’Mahony lived “ignored the principle of equity – audi alteram partem – hear the other side.”

Archbishop Martin urged those who accused him of vilifying Bishop O’Mahony to heed that too and listen to the other side of the story.

Fr Tony Flannery on his blog about Bishop O’Mahony stated that bishops and senior clergy made no effort to assert their rights to natural justice at the time of the Murphy Commission of Investigation.

The Redemptorist claimed, “I know they did this so that no more pain would be caused to those who had suffered at the hands of priests, but they got no acknowledgement for this; indeed they were vilified from all sides, including by the Archbishop of Dublin.”

Archbishop Diarmuid Martin on Sunday strongly defended the findings of the 2009 Murphy Report into the handling of clerical sexual abuse in Dublin diocese.

He also argued that Bishop O’Mahony had had “ample opportunity during the working of the [Murphy] commission and afterwards” to put his case across and challenge its findings.

He said Dr O’Mahony had had “a robust engagement” with Judge Yvonne Murphy’s Commission and was assisted by “very competent” lawyers, paid for the archdiocese of Dublin, following his refusal to use the diocese’s lawyers.

He countered claims that Bishop O’Mahony did not publicly defend himself against the criticisms of him in the Murphy Report by highlighting how after the publication of the Report, Dr O’Mahony had sent letters to the diocesan council of priests defending himself and these were published.

The bishop had also urged the priests’ council to challenge the Murphy Report. “So it is not true to say he didn’t defend himself,” the Archbishop stated.

Asked about claims at the funeral in Shankill that Bishop O’Mahony had been scapegoated, the Archbishop indicated that if scapegoated meant that the Murphy Report was inaccurate then those who believed that should consider legally challenging the report. He noted that no one so far had gone down that route.

At the bishop’s funeral, the congregation were also told that Dr O’Mahony sent a letter to the Director of Communications of the diocese of Dublin in which he expressed regret that any action or inaction of his should have contributed to the suffering of even a single child.

It was claimed that the statement was never made public lending a perception that he didn’t express any remorse.

However, on Sunday Archbishop Martin said he had gone through all files and found just two draft statements which were emailed to the communications office by a third party on behalf of the bishop as he had indicated that he did not want the diocesan press office to act on his behalf on other matters.

These statements were sent as drafts ahead of the publication of the Murphy report in July and October.

Following the publication of the report, neither Bishop O’Mahony nor the third party came back to tell the communications office to publish a statement.

According to Archbishop Martin, “Bishop O’Mahony was able to issue statements on his own at the time”.

He never spoke to Archbishop Martin about the matter and never contacted the press office about what they should do with the draft statements following the publication of the Murphy Report.

The Archbishop of Dublin also moved to clarify why Bishop O’Mahony did not say Mass for some time in his parish following the publication of the damming report on the handling of clerical abuse allegations.

“That was the wish of the parish,” who felt that in his interest it would not be better because they couldn’t guarantee how people who were angry would react.

Likewise in the first year after the Murphy report, Bishop Eamonn Walsh and Bishop Raymond Field didn’t do confirmations, not because they offered to resign, but they were afraid that something could happen. Bishop O’Mahony had done confirmation subsequently.

Asked about Judge Fergal Sweeny’s Review of the Murphy Commission of Investigation, Archbishop Martin said he felt his conclusions were “fundamentally flawed”.

He criticised his reliance on one source and that source’s interpretation of what happened.

“Every diocesan priest including bishops who went were offered the legal support of the diocese of Dublin,” and “nobody mentioned in the Murphy report had a meeting with the commission without a legal person being present,” he confirmed.

In response to arguments that the by the understanding and knowledge of the 1970s and 1980s, not just in the church, but in society, the steps taken can be more readily appreciated, Archbishop Martin responded, “If you had listened to the things that I have listened to – the stories of victims – it would be very hard for you to justify saying that. The stories are heart-rending and many of those weren’t listened to. Some of the victims who had the courage to go public at that time didn’t have an easy time with the Church. Rape and sexual assault were known crimes at the time. They were different times but the sexual abuse of children was always a crime in canon law and a crime in civil law and a sin.”