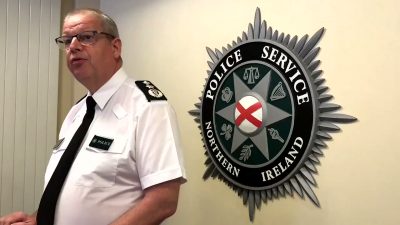 A hard no-deal Brexit will have an “absolutely detrimental” impact on the Northern Ireland peace process.

That’s the warning to British politicians from Simon Byrne, chief constable of the Police Service of Northern Ireland (PSNI).

The two men in the running to become the next leader of the Conservative Party and the next UK Prime Minister, Boris Johnson and Jeremy Hunt, are both self-described “Brexiteers”. Both have said they are prepared to accept a no-deal departure by the UK from the European Union.

Such a no-deal scenario would mean that goods imported and exported between the UK and the EU would be subject to tariffs and there would be a hard border between Northern Ireland and the Republic.

Mr Byrne said in a press conference yesterday that the police know there is a small number of people “intent on disruption” and causing serious harm in Northern Ireland.

“We are worried that, in the short term, a hard Brexit will create a vacuum that will become a rally call and a recruiting ground for dissident republicans. Clearly, any rise in their popularity, or their capability, would be very serious.”

“If we have a hard border, the question I have for London, frankly, is: how do we police that hard border?” Mr Byrne said.

He said the introduction of tariffs, particularly on agricultural goods, could potentially be a cause of major hardship to the farming community, to the extent that the economic situation could be a major cause of grass roots discontent.

“If tariffs change and drop, we will see the prospect of animals being culled and people going out of business,” he said. “That may lead to unrest and our having to protect other agencies as we go to support new arrangements.”