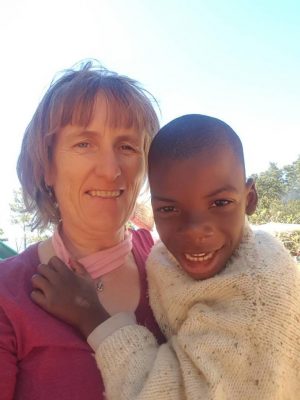 Gena Heraty has won the Red Cross Humanitarian of the Year Award for her work among poor and marginalised children in Haiti. Because of violence in Haiti she was unable to travel to Dublin, however, and her nieces accepted the award on her behalf.

She addressed the awards ceremony live by Skype link from Haiti and spoke about her work with abandoned children and a programme to support parents and ensure that children are not abandoned.

“It is very rewarding work. It is great to get an award to feel the acknowledgement. I can only accept this on behalf of all the people I am working with and that I live with. I am accepting it on their behalf,” she said.

The Irish Red Cross stated that Gena Heraty, who is originally from Co. Mayo, arrived in Port-au-Prince, Haiti in 1993 and now, almost three decades later, is known all over Haiti “for challenging prejudice against people with physical and intellectual disabilities”. Conditions are extremely challenging in Haiti, and Gena has in the past faced a vicious attack by armed men, where one of her colleagues was killed.

Speaking about the current violence in Haiti, she said that as part of an international organisation she has good security. However, for her colleagues from Haiti it has been dangerous on a daily basis over the last three months.

“They have been shot at, they have had stones thrown at them, they have to navigate burning tyres and trees. Right now it is probably the most dangerous time in Haiti since I have been here,” she said.

The Irish Red Cross described her as co-ordinator of the special needs programme with Nos Petits Freres et Soeurs (NPFS), a home for orphaned and abandoned children. Her team has developed an outreach programme which provides education for over 100 schoolchildren with neurological disorders, while approximately 80 patients a day (30,000 a year) receive physical therapy treatments. She is also the co-founder of the Kay Christine home for children with special needs at NPFS, which has created services to ensure children with special needs are not abandoned.

Speaking of the Kay Christine home via Skype to the awards ceremony last weekend, she said that it was a home like many others but with children who have a range of abilities and disabilities and that services have been improved over the years.

“It is proof of all that can be done. We are people of hope, and we are very positive, and we always try to push the message that although Haiti has many problems, we can do many things and many other people like us are doing great things,” she told those who attended the awards. She was cheered on by family members and fellow charity workers from Misean Cara Ireland, Viatores Christi and other organisations.

Tipperary man John Lonergan was honoured with a Lifetime Achievement Award for his contribution, spanning four decades, to Irish society through his work in Irish prisons.