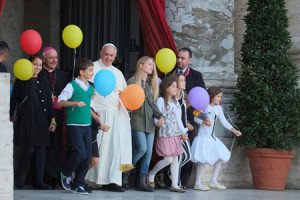 Delegates from the Catholic Grandparents Association in Ireland were among the 150,000 people who participated in last weekend’s Family Pilgrimage to the Tomb of St Peter.

The gathering in Rome brought together delegates from the CGA in Ireland, Scotland, Malta, the US, England and Wales.

They joined members of the International Catholic Grandparents Association for the two-day pilgrimage.

The pilgrimage was organised by the Pontifical Council for the Family.

Founder of the CGA, Catherine Wiley and her husband Stewart, were introduced to the Pope while some of her grandchildren also formed part of a select delegation chosen to sit next to the Pontiff.

During the celebrations on Saturday, over 10,000 balloons were released in joy and prayer as Pope Francis spoke of the importance of grandparents in families.

Elsewhere in his address, the Pope explained, “Like the Holy Family of Nazareth, every family is part of the history of a people; it cannot exist without the generations who have gone before it. Therefore, today we have grandparents and children. The children learn from their grandparents, from the previous generation.”

He also suggested that the basic ingredient for a happy marriage and a happy family was the ability to say ‘please, thank you and sorry’.

In his homily at the concluding Mass on Sunday, Pope Francis reinforced the need for prayer in the family.

He said, “Praying the Our Father together, around the table, is not something extraordinary: it’s easy. And praying the Rosary together, as a family, is very beautiful and a source of great strength!”

“And also praying for one another! The husband for his wife, the wife for her husband, both together for their children, the children for their grandparents … praying for each other. This is what it means to pray in the family and it is what makes the family strong: prayer.”

The CGA is committed to keeping prayer at the heart of the family, supporting and valuing grandparents as sources of wisdom and faith and enabling them to pass on our faith to future generations. 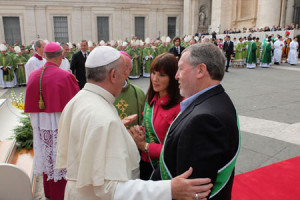 Catherine and Stewart Wiley of the CGA meet Pope Francis.

Following the Mass, Catherine Wiley, Founder of the Catholic Grandparents Association, and her husband Stewart were presented to Pope Francis to receive his blessing.

Catherine Wiley gave him greetings from grandparents all over the world and she asked him to help her spread the word about the Catholic Grandparents Association in order to create awareness of the vocation of grandparents.

During the weekend it was also announced that the Pontifical Council for the family will convene the first ever International Conference for National Leadership of Catholic Grandparents Association.

The Conference will be held in Rome in November 2014.