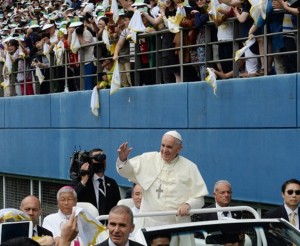 At a meeting with 6,000 young people in Korea, Pope Francis appealed to young people to be generous with God and to put their lives at his disposal.

“I recommend you pray, ‘Lord what do you want of my life?’ Repeat it at least three times,” he told representatives of 22 Asian countries gathered at the Shrine of the Korean martyrs in Seoul for the Sixth Asian Youth Day.

At Daejeon’s World Cup Stadium, the pontiff celebrated Mass for around 50,000 Catholics where he recieved a rapturous welcome, with shouts of ‘Viva il papa’ as he entered the packed stadium.

The strongest event in the Korean national psyche at present is the aftermath of the Sewol ferry disaster in April which claimed the lives of around 300 people, most of them school children.

Before the Mass, the Pope met with eight survivors and two parents of those who died.

During the Mass which celebrated the Solemnity of the Annunciation, the Pope prayed in English for the victims of the disaster and their families and all those affected by the tragedy.

In his homily, Pope Francis urged the congregation to “combat the allure of a materialism that stifles authentic spiritual and cultural values.”

“May the Christians of this nation be a generous force for spiritual renewal at every level of society,” he said.

“May they also reject inhumane economic models which create new forms of poverty and marginalize workers, and the culture of death which devalues the image of God, the God of life, and violates the dignity of every man, woman and child.”

In the late afternoon, Pope Francis travelled to shrine of the Korean Martyrs in Seoul.

In a huge tent, young people listened to three young faith ‘testimonies’ and the Pope’s response to them.

Then he addressed them. “So many of our own friends and contemporaries, even in the midst of immense material prosperity, are suffering from spiritual poverty, loneliness and quiet despair. God seems to be removed from the picture.” he said. 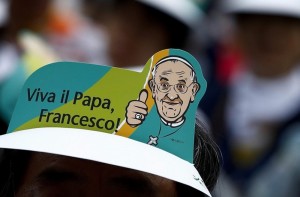 “It is almost as though a spiritual desert is beginning to spread throughout our world. It affects the young too, robbing them of hope and even, in all too many cases, of life itself.”

But the Spirit of Jesus can bring new life to every human heart and can transform every situation, even the most apparently hopeless, he said, urging the young people to bear witness to the Gospel.

In this generation the Lord is counting on you! he said. “Are you ready to say ‘yes’ to him?”

When the Lord calls us to do good for others, it’s the same, whether it be in the consecrated life, as a lay person or in a family.

You do not have to choose any path, he added. “The Lord must choose! You must ask Him: ‘Lord, what should I do?”

He advised the young people that only the happiness of love lasts. “And the path of love is simple. Love God and love your neighbor as your brother, as the one who is close to you, who needs love.”

Asked about the wound caused by the division of Korea, the Pope advised the young people to pray for the unity of the two Koreas and together the whole assembly stopped for a moment of silent prayer.

He added that the fact that they shared a common language was positive. “When in a family you speak the same language. There is also a human hope.”