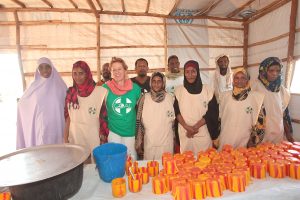 A GOAL aid worker with more than 27 years’ experience, Mary T Murphy, has received a 2017 ‘Presidential Distinguished Service Award for the Irish Abroad’.

The Cork woman has been recognised under the charitable works category in acknowledgement of a career spent caring for and supporting those affected by some of the worst global crises – drought, conflict, poverty, ebola and Aids / HIV across several countries including Ethiopia, Democratic Republic of Congo, Rwanda and Burundi.

“Now more than ever, the compassion, empathy and generosity of spirit, so characteristic of our people in our best moments, are displayed by our awardees here today,” said President Michael D Higgins at the awards ceremony, at Áras An Uachtaráin, on 30th November 2017. “These values have been given an inspiring expression in the work of the indefatigable Mary T Murphy, who has spent her life caring for and supporting those affected by illness, drought, conflict and poverty,” he continued.

Africa is a continent that carries many of the several consequences of global warming, he added, and by 2050 will have 26% of the global population and 38% of the young people of the planet.

“It was my honour to visit Mary in Gambella in Ethiopia in November 2014, and I had the opportunity to see at first-hand the impact of her tireless work with those fleeing famine, persecution and war. Her dedication of her life’s work to helping people on the continent of Africa – in the Democratic Republic of Congo, in Sierra Leone, in Burundi, and in Ethiopia – is a testament to the best of the humanitarian spirit. It is humbling to consider the influence that Mary’s work has had on so many people.”

Following a decade working and training as a staff nurse in the special care and intensive care units of Our Lady’s Hospital for Sick Children in Crumlin, Dublin, Mary joined GOAL in 1994. As a medical co-ordinator in the Democratic Republic of Congo, she helped respond to the refugee crisis precipitated by the Rwandan genocide, and was involved in organising medical facilities for approximately 27,000 refugees. 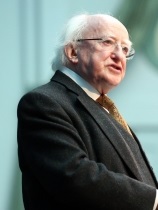 During the Ebola crisis in 2015, she had two stints in Sierra Leone directing and managing GOAL’s Ebola response programme. Her work included the management of a fully-equipped and functioning Ebola Treatment Centre (ETC), staffed by more than 450 international and national aid workers, and which treated more than 600 Ebola patients. Currently in Ethiopia, she is responsible for large-scale emergency refugee programmes that cater for tens of thousands of South Sudanese and Eritrean refugees.

The Presidential Distinguished Service Award was established by the Irish Government to recognise the outstanding contribution of Irish people living overseas, who have rendered distinguished service to the nation and/or its reputation abroad.

Nine others received this year’s Presidential Award, including Denis Mulcahy, a New York Police Department Bomb Disposal Officer, who founded Project Children, which over the course of thirty-six years, brought over 20,000 young people – Catholic and Protestant – from Northern Ireland to encounter each other in the safe environment of North America.

Others who received awards included actor, Liam Neeson; artist Bernard Canavan; Nobel prize winner, William Campbell; and former Ambassador of Canada to the US, John de Chastelain, in recognition of his role in the Northern Ireland peace process.