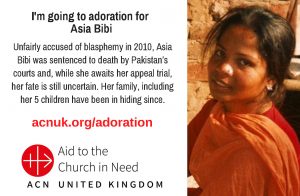 One of the ACN #Go2Adoration cards, this one featuring the plight of Asia Bibi and her children.

Eucharistic Adoration and Mass have become acts of solidarity with persecuted Christians, thanks to an initiative launched by the charity Aid to the Church in Need (ACN).

The initiatives ware first presented to some 6,000 congress delegates at the National Eucharistic Congress held in Liverpool earlier this month, but such has been the response that ACN has had to order a second print run of its Go2Adoration prayer cards.

ACN’s school and youth officer Marie Fahy said since the congress the organisation had been overwhelmed by the response from both laity and clergy. “People are wanting prayer cards, and resources and speakers for their parishes, schools and colleges. Some schools have asked for a prayer card for every pupil.

“This call to participate in a wave of prayer for our brothers and sisters in Christ will now continue in schools, universities and parishes for the next year and beyond.

“The number of teachers, chaplains, catechists and parish representatives who have agreed to promote this call to prayer pays testament to the belief, expressed by Saint Pope John Paul II, that ‘prayer linked to sacrifice is the most powerful force in the world’,” Ms Fahy said.

ACN is also running a Go2Mass campaign where Catholics go to an extra Mass to pray for one of the 200 million Christians who are facing the threat of persecution or even death for their faith.

ACN is a pontifical foundation that began as a pastoral initiative by a Dutch priest, Fr Werenfried van Stratten in 1947, who earned the nickname “the bacon priest” because of his work to provide food aid to German refugees fleeing Eastern Europe after the Second World War. This developed into a mission to provide clandestine support to the faithful in Communist countries where all religion was effectively banned.

Now ACN works to support religious freedom across the globe and has 20 branches worldwide. It is particularly active in the Middle East at present, as Christian communities there are increasingly under attack from Muslim fundamentalists.