The Benedictines at Glenstal Abbey celebrated the feast of Saint Benedict with the ringing of new bells. 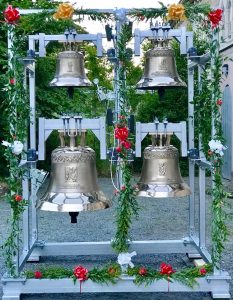 The bells at Glenstal Abbey

“Thanks to a generous gift, we are installing a set of four brand-new bells this week,” stated the monks as they issued an open invitation for the public to attend the celebration.

The bells, named Benedict, Scholastica, Joseph and Columba, were decorated and ready to be blessed before Mass on Wednesday (11 July), St Benedict’s Day.

They were hoisted into position on the library, from where they rang out to call the monks and all others who heard them “to give honour and glory to God in the sacred liturgy,” the monks stated.

Fr Brendan Coffey, the sixth and current Abbot of Glenstal, spoke during the Mass, stating that bells have the important task of calling people to pray. “But bells do more than just summon, they ring out a particular message, and for us that message is summed up in the life of [St] Benedict of Nursia,” he said.

“As we face the challenges and difficulties of living in the 21st century, our temptation today is to rely more than ever on power – something which is conspicuously absent from Benedict’s list. Our leaders tend to be powerful people with big personalities. We can see it around the world today,” he said.

He highlighted how all over the world people spend huge sums of money to keep “safe” and “to keep the stranger out”. But this goes against the second beatitude: “Blessed are the gentle”.

He explained that that this is a world view built on fear, and which is not a very happy place in which to live.

“Benedict’s world is built on hospitality, the search for God and mutual wellbeing and in the end it is a much safer place to live,” he said. “Change begins with me. This is the Christian message which rings out from a Benedictine monastery, the call which summons the Christian people everywhere to pray, the clear pure resounding chime of peace.”

The service was open to the public and could be viewed on the internet, as it was streamed live on the Glenstal Abbey website.