Home > Featured > Get designing – you have a month! 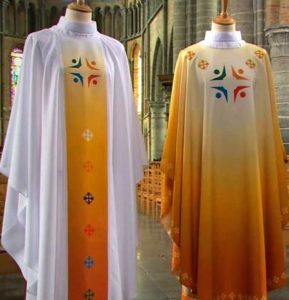 Vestments for the International Eucharistic Congress 2012 in Dublin, designed by Slabbinck studio.

The vestment design must be  ‘unique and inspirational’ and “should lend itself to large volume production and should be easily produced, cleaned and maintained”.  Priests, bishops and Pope Francis himself will wear the vestments during Masses at the 21-26 August 2018 event in Dublin, and afterwards in different liturgical contexts nationally and internationally.

3.00pm on 20th December 2017 is the deadline for applications.  An independent panel will judge the designs and award the winner €1,000.  A spokesperson for the World Meeting of Families told CatholicIreland that they had not yet picked the date when the winner would be announced but it will be in the new year.

The WMOF congress theme –  “The Gospel of the Family: Joy for the World” (based on Pope Francis’ apostolic letter, Amoris Laetitia) must in some way be reflected in the design.  The organisers suggest several themes from the apostolic letter to guide artists: 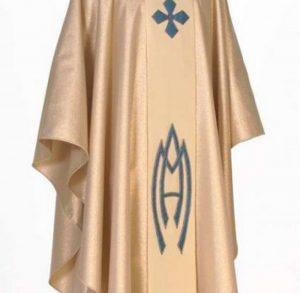 Artists may submit up to three original designs. Each design should be accompanied by a short note (200 words max.) explaining its inspiration.

With their work they have the possibility of joining other famous artists who also designed vestments, like the 20th century artist Henri Matisse, who famously designed chasubles for the Chapelle du Roasire in Vence, France, copies of which are now exhibited in the Vatican and in MOMA in New York.   Elizabeth and Lilly Yeats, sisters of the poet William Butler Yeats, and members of the Dun Emer Guild, crafted vestments used at the Eucharistic Congress held in Ireland in 1932. Their cloth of gold creation with intricate Celtic embroidery influenced by Elizabeth’s time in the circle of William Morris, are still in use in St Mary’s Pro-Cathedral in Dublin today.

The Slabbinck Art Studio in Brugge, Belgium was entrusted with the design and confection of the vestments to be used during the liturgical celebrations of the 50th International Eucharistic Congress in Dublin in 2012.