Home > Featured > Genocide survivor is Global Citizen of the Year 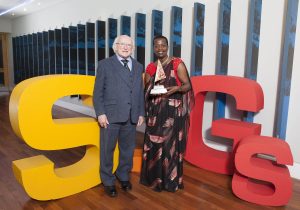 President of Ireland, Michael D. Higgins meets the winner of the Global Citizen of the Year Award, Colette Nkunda of Misean Cara with the Dóchas Award Trophy. Photo: Peter Houlihan

A woman who left Rwanda in the aftermath of the genocide of 1994 and settled in Ireland has been honoured with the Dóchas Global Citizen of the Year award.

Colette Nkunda joined Misean Cara two years ago and currently works to develop the skills and capacities of members in over 50 countries.

She shares her vast experience with the wider NGO sector as Vice-Chair of the Dóchas HIV and AIDS working group.

Born and raised in Rwanda, the panic, anguish, fear and loss of 1994, forced Colette to find a new home.

And so, she arrived on Irish shores, determined to carve out a new path.

Shortly after her arrival in Ireland from Rwanda, she quickly took up work with Trócaire, working in close collaboration with Irish missionaries in Nigeria, the Democratic Republic of the Congo, Sierra Leone, Haiti and Brazil.

Her personal experience of genocide and conflict prompted her to join the team at the Glencree Centre for Peace and Reconciliation, designing programmes for communities in conflict in Mali and Palestine amongst others.

Responding to the news that Colette Nkunda had won the award, co-workers at Misean Cara paid tribute to her.

“Colette is one of the most valuable members of our team. This is a hugely deserved win, and recognition of Colette’s achievements and contribution to development,” Misean Cara CEO Heydi Foster said.

She said she has excelled from the first day she started work helping to develop the capacity of Misean Cara members in Ireland and around the world.

“There is no question in my mind that Colette will use this award as a platform to make a difference, and speak out on a number of challenges affecting our world.”

Heydi Foster continued, “One of the added bonuses of having Colette be part of our team is her ability to see potential in her work, and the people she works with. She has been instrumental in several projects in our organisation, and responding to the needs of our members.”

“Outspoken and a true leader, she has taken a number of staff under her wing. Colette shares her experience, and guides junior members of staff encouraging them to reach their full potential. This quiet honestly is something that cannot be bought or taught, mentoring is an inherent part of her nature, character and personality,” Heydi Foster said.

This week, President Michael D Higgins met the winner of the Global Citizen of the Year Award after his keynote speech at the 2016 Irish Summit on the Sustainable Development Goals at Croke Park.

This follows a major global agreement by world leaders who signed up to these goals in 2015 through negotiations which were co-chaired by Ireland.

The Summit looked at how the Irish government and civil society can play its role in achieving these goals – to end extreme poverty and tackle climate change in Ireland and around the world by the year 2030.

It has a particular relevance to the ongoing migrant crisis and tackling the root causes– poverty, inequality, conflict and climate change.