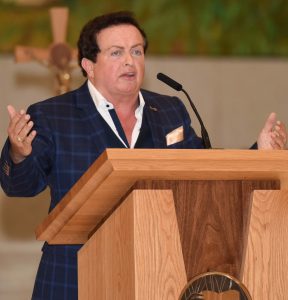 Speaking at the Knock novena this week was “one of the greatest honours of my life” said Gaelic games broadcaster Marty Morrissey. Addressing the annual novena, which attracts around 150,000 people, Mr Morrissey spoke on the theme ‘Living life to the full’ on Wednesday.

Beginning his talk, which was interrupted by several outbursts of spontaneous applause, Mr Morrissey confessed that he had been stunned after being asked to speak at the Novena. He said he was an “ordinary Joe soap”, just trying to do his best to live life to the full.

“What do we need to live life to the full?” he asked in his 30-minute talk. “There are many components, but in my humble opinion the first and most important is love. Love is the greatest power on earth and conquers all. I genuinely find that if you give positivity, you get positivity back.”

Endorsing what Pope Francis wrote in The Joy of Gospel, the Gaelic games commentator told the congregation at Knock basilica, which was packed to capacity, that “One of the most serious temptations which stifles boldness and zeal is a defeatism which turns us into sourpusses!”

Alongside love, in order to live life to the full, came communication, he continued. “The idea of the spoken word, what we say and how we say it, is crucial. The throwaway remark, the critical comment, can have an impact that you may never be aware of.”

But actions could be even more effective than words. “All of this brings me to the most important ingredient of living life to the full, our families.”

We all come from families and we owe it to them to live in peace and harmony, to love one another and to look out for one another. Isn’t it sad that there are so many families not getting along? He knew of one family who had not spoken to each other for years over a “right of way, a piece of road that nobody uses. How sad, how terribly sad.”

In order to cultivate those relationships of peace and harmony, we need to create space in our lives, we need to make time for God, continued the sports broadcaster. “Family has always been important to me, and when I say family I also include a very close circle of friends.”

He lamented the lack of contact between neighbours nowadays. “Since my father died, I have become very aware of all of the people who are living alone in rural and urban Ireland and are very lonely. Once upon a time, when people had much less and more time, people used to visit their neighbours to make sure they were okay. Now it’s different. People are too busy or too distracted by their mobile phone, emails or Twitter. It’s the way of the world right now and I am as guilty as anyone else. Loneliness is a real problem in Ireland and it’s very sad.”

Turning to the topic of Irish youth, often criticised for being “mad on drink and drugs”, Mr Morrissey said his experience travelling around Ireland was that “we have a nation of bright, intelligent, caring and mannerly young people”, and he told parents and children to give themselves a “massive applause”. 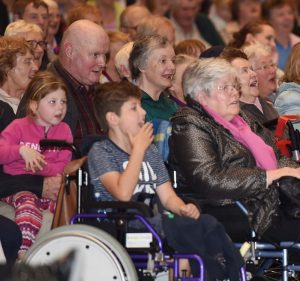 The broadcaster said Mayo supporters were the greatest in the world, and admitted that his heart was behind Mayo for the All Ireland.

“I often stop for a moment after finishing my report or after doing a match commentary in Sligo, and say a prayer at the back of the church. Many times I stay for the 7.30pm Mass. I have always wanted to keep that moment of reflection quiet, but let’s face it, my secret is out after today! I come to this sacred place to thank you Lord for what you have done for me and for the talents you have given me. I never really ask the Lord for anything, but tonight I will. Can you please, Lord, with the greatest respect to all my friends in Kerry, Dublin and Tyrone, let Mayo win the All-Ireland football final?”

He concluded his advice for living life to the full: “Enjoy every day. Put a smile on. Say ‘Hello, how are you?’ If you are having a row with somebody, get in contact and say we need to sort this out because life is short.”

Today Bishop Patrick Rooke, Church of Ireland Bishop of Tuam, will speak at the 3pm and 8.30pm Masses on ‘Reformation, Remembering and Reconciliation’, marking the beginnings of the Reformation 500 years ago.

On Monday the programme for next year’s World Meeting of Families in Dublin will be launched at the shrine by Archbishop of Dublin Diarmuid Martin and Fr Timothy Bartlett, secretary general of the 2018 event.

The novena concludes on Tuesday 22 August with Maria Steen and Cora Sherlock, both well known for their roles in the pro-life movement.